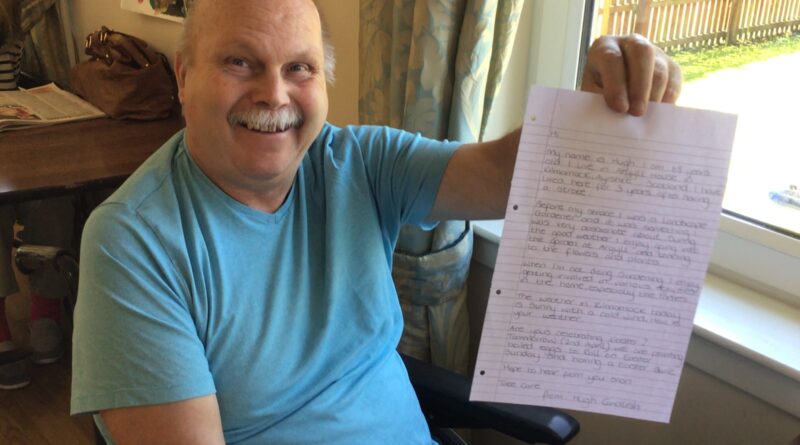 RESIDENTS at a Kilmarnock care home have signed up to a novel pen pal partnership with another older people’s residence in Kilmarnock – but this one is 3600 miles away in the US.

Activities coordinators from Mansfield Care’s Argyll House and Commonwealth Senior Living in Kilmarnock, in the east coast state of Virginia, carefully matched each Scottish resident to their American counterpart, based on background, hobbies and interests.

So far, 15 residents have taken part in the arrangement, which amounts to around half of the 31-bedroom care home. With the support of staff, each one has written their own personal letter, introducing themselves and what they like to do.

Lyndsey Lang, Activities Coordinator at Argyll House, came up with the idea and has been facilitating the project.

She said: “I came across Kilmarnock, Virginia, through a Google search and was amazed to find they had a care home too. It seemed like the perfect place to set up a partnership.

“The residents have been very enthusiastic about writing their letters. There’s been lots of reminiscing going on.

“The pandemic has been quite a lonely time for a lot of them and some don’t have regular family to stay in contact with. Setting up the pen pal arrangement is designed with this in mind. It gives them someone to share their stories with.

“A lot of our residents struggle with mobility issues so myself and some of the team have been helping out with the actual writing part, but the letters are all their own words. They’ve covered everything from previous jobs, to favourite memories to current interests. Some of them have been up to three pages long.

“The residents have been able to explore Commonwealth Senior Living via Facebook. They’ve enjoyed connecting with the home visually and seeing who they’re writing to.”

Resident, Margaret Hart, has enjoyed writing about her past career as a school cleaner and also her love of singing.

Margaret said: “I have a large close family, but it’s always nice to have someone new to talk to. I’ve enjoyed reminiscing on my past career and my love of singing. I’m very much look forward to receiving a response.”

Another resident, Christine Scott, 77, said: “I wanted to take part as I’m interested to find out about a different home, and what it’s like to live there. I’m also interested in finding out how they have coped during the pandemic.”

Hugh Candish, 69,  has enjoyed writing the letters as it is giving him something to look forward to.

Hugh said: “I don’t have any friends out with Argyll House, so it’s nice to be able to reach out to someone new. I’m really looking forward to being able to share my memories with someone.”

“While this is the first time we’ve done anything like this, if the initial response is anything to go by, this will hopefully become an ongoing partnership for years to come.”