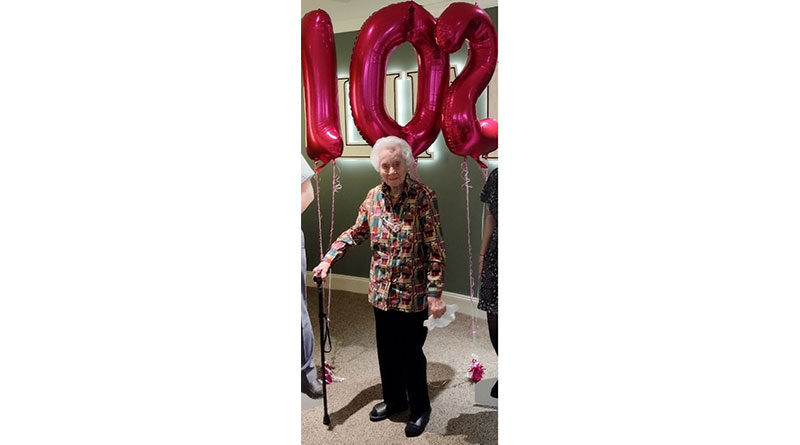 To mark the incredible achievement, Lore was treated to a beautifully decorated cake prepared by the wonderful catering team at the care home, all while surrounded by friends and family. She also received numerous cards from loved ones as well as new flowers and plants to add to her much-adored windowsill garden.

Born in Holland in 1920, Lore has lived an extraordinary life. She arrived in the UK in 1936 with her mother and sister and lived in London when the Second World War broke out in 1939. As was the case for many people, the war proved to be a defining period in Lore’s life. After the conflict started, her father suggested that she, her mother and her sister, return to Holland so that they could be together as a family. Lore decided to stay in the UK, while the rest of her family returned to Holland as proposed by her father. This proved to be a fateful moment in her life, after her mother, father, and sister all tragically died over the course of the war.

However, in this period she also found happiness in an unsuspected place, meeting her future husband in London at a sandbag making party. After the conclusion of the war, the two married in Glasgow in 1946, where she lived until she moved to Bushey over 50 years later in December 1998.

During this time, she helped her husband with his business until he passed away, and was heavily involved in charity work, volunteering with the Women’s Royal Voluntary Service for over 20 years. This fantastic contribution was recognised when Lore, aged 90 and still volunteering, was invited to the prestigious Royal Garden Party at Holyrood House in Edinburgh. Accompanied by her son, this was a fantastic moment for both, who thoroughly enjoyed the momentous day.

Asked what the secret is for living to such an impressive age, Lore said:  “My good health and longevity are due to the cards being stacked in the right order from birth. It is in the genes. I did not have much control of that as a child but when my husband died, I was still only in my late 50’s and had to rebuild my life in lots of different ways. I helped the elderly and looked after so many people, as well as helping young mothers too. I taught so many people the joys of bridge, my favourite game, which I still do now – I wish there was a condition of entry at Elton House that all potential residents could play bridge!”