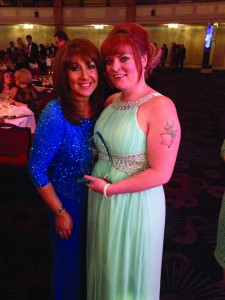 Becky Harvey, Qualification and Framework Manager for Belena Training, has won the Trainer of the Year Award at this year’s prestigious Great British Care Home Awards.

Becky originally won the category at the South West Care Awards last year, but now her achievements have been recognised at national level. A glittering awards ceremony was held on Saturday 26th April, at the Grosvenor House Hotel in London’s Park Lane, where the national category winners of the Great British Care Home Awards were announced and awards were presented by TV personality Jane McDonald.

The Awards aim to celebrate excellence in social care and recognise the best work in the care home and home care sector throughout England.

Nine regional Great British Care Awards ceremonies were originally held in Autumn 2013. Winners from each region were invited to compete once again to become the national champions. Becky beat off rival nominations from all over the country as a result of her dedication, hard work and commitment. The award recognises her high success rate with learners, and her impressive achievements which has seen the business grow to over 300 learners.

““Social care work is one of the most difficult, and at the same time, one of the most spiritually rewarding careers. People who work in social care, make a huge difference to the lives of the people they work with, and are some of society’s unsung heroes.

The Great British Care Awards looks to redress the lack of recognition that  people who work in social care receive, and is recognising and rewarding the very best in the social care workforce, giving them praise and respect for the transformational work that they do every day.”.”

The judges at the ceremony commented “You cannot help but be struck with Becky’s energy, enthusiasm and passion. She is committed to learning and developing others”.

In her own words about being a care trainer, Becky said “Helping others to achieve their potential is such a rewarding part of my job. Receiving this Great British Care Award is amazing and great to have my work at Belena Training recognised by the industry.”

Becky started her career in care in 2001 at a Gloucestershire Nursing Home, completing her level two and three apprenticeship in Health and Social care.  Her career progressed quickly and lead to her being promoted to Training Assessor, due to the high standard of her work.  Becky joined Belena Training in 2012 and is responsible for training carers within the private sector which includes nursing homes, supported living, residential homes, neurological units, substance misuse rehabilitation and day centres. Belena Training also supports and implements training at one of the South West’s largest home care and care home providers, Cleeve Care, which owns Link Homecare, Live in 24 as well as three care homes throughout the region, ensuring the society’s most vulnerable people are being given the highest standard of care.