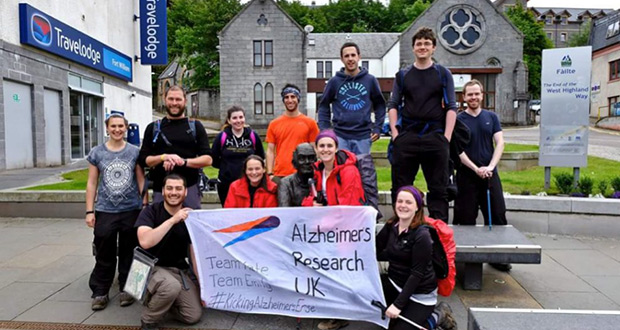 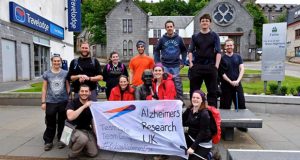 Two sisters literally flew the flag for dementia research and raised £10,000 when they completed an epic walk through Scotland in honour of their mum who has early-onset Alzheimer’s.

Kate Carranza, who lives in Glasgow, and Emily Aitkenhead, who lives in Edinburgh, organised the two-stage 175-mile walk from Milngavie to Inverness to raise money for Alzheimer’s Research UK. They were inspired by their mum Helen Aitkenhead, from Thornhill, Stirling, who was diagnosed with Alzheimer’s disease in December, aged just 54.

Kate, 24, along with her husband Shawn and several friends, walked the 96-mile West Highland Way from Milngavie to Fort William. She carried an Alzheimer’s Research UK branded flag and left it in a shop for her sister to pick up for her stage of the walk.

Emily, 26, then walked along the 79-mile Great Glen Way from Fort William to Inverness. She was also joined by some friends but completed a large part of the walk on her own.

Their mum Helen was at the start and finish of both stages of the trek to support the walkers.

Kate, who is studying for a masters degree in mental health nursing, said:

“Every day we lose a little more of our mum and it’s heartbreaking for us, dad and everyone who knows and loves her to see. However, we’re determined to make the most of every day we have with mum and find all the positives that we can.”

“It’s so sad for this to happen to someone so young, but we are staying positive about it and doing this trek was part of that.

“We chose to raise money for Alzheimer’s Research UK because we feel money going towards helping to find a cure is the most important thing.”

“The idea came about around our parents’ kitchen table. My sister and I were having a brainstorm thinking about what we could do to raise some money for charity. We just want to be able to contribute something towards research and help publicise it as well.

“We couldn’t get our diaries to match up so we decided to do two separate walks and then combine the fundraising into one.

“There were many injuries on the way and it was more mentally challenging than I thought it would be. A few tears were shed during the walk.”

“I’ve led some Duke of Edinburgh expeditions, but I’ve never walked that kind of distance before. I walked four days solo, camping out on my own each night. The hardest part was the final day, Drumnadrochit to Inverness. It was the longest distance and the most hilly.”

The sisters smashed their original fundraising target of £2,500. To boost the total further visit http://uk.virginmoneygiving.com/team/KickingAlzheimersArse

Although often thought of as a disease of the elderly, around four percent of people with Alzheimer’s are under 65. Alzheimer’s is the most common cause of early-onset dementia. Symptoms can include memory problems, confusion, changes in personality and behaviour, language problems and visual problems.

“Physically and day to day mum is doing okay. She gets quite embarrassed by the problems with her memory. You can’t really leave her on her own because she gets quite anxious, she gets quite confused if she gets out of her routine.

“We’re a very close family. Everyone’s being very patient and we’re just trying to make the best of what we can. Everybody has just rallied around my mum, the community’s been amazing. We know that mum is cared for and supported.”

“We can’t thank Kate and Emily enough for their fantastic fundraising efforts and we’re absolutely thrilled that they smashed their target.

“There are more than 850,000 people in the UK living with dementia. Alzheimer’s Research UK is on a mission to end the fear, harm and heartbreak of dementia, and we couldn’t do it without our supporters.”

Kyle would like to hear from anyone in Scotland who would be interested in joining an Alzheimer’s Research UK Fundraising Group. For more information contact Kyle on 07760 884529 or email kyle.lockhart@alzheimersresearchuk.org