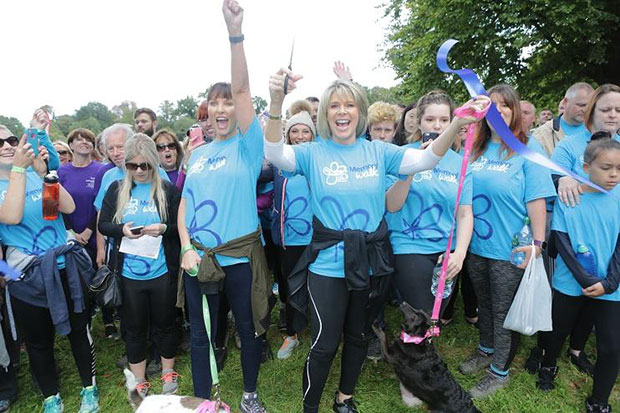 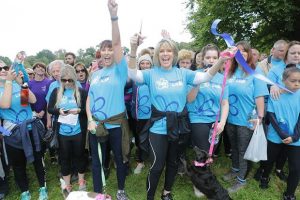 Strictly Come Dancing star Ruth Langsford took a break from the dancefloor to join 3,000 people who united against dementia at an Alzheimer’s Society Memory Walk.

The Loose Women and ITV This Morning presenter, who lost her dad, Dennis, to dementia, swapped sequins for a blue Alzheimer’s Society t-shirt when she took part in the charity’s Surrey Memory Walk at Painshill Park, Cobham, on Sunday (October 8).

Ruth, who brought her dog Maggie along, said: “I know everyone is walking for the same reason I’m walking, which is to remember a loved one who is living with dementia or who sadly passed away with dementia. I know what that feels like, it happened to our family and I know it’s very difficult for those who are dealing with it.

“We are uniting and fighting with this battle against dementia, and we will win it but we need research and that research costs a lot of money. And that’s where fundraisers come into it – people come to events like this and we fundraise as much as we can, as well as raising awareness of dementia.

“My family knew very little about dementia and that was 15 years ago and we were a bit lost. I do think that’s changing and improving, but there’s still a lot to do and we have to do it together.”

Ruth added: “You can live a good life with dementia, with the support of your family. The atmosphere here is wonderful. It’s an uplifting walk. We all have sadness because our lives have been touched by dementia, but it’s uplifting to walk with people who understand that.”

Ruth opened the walk along with actress Emma Barton, who is best known for her role as Honey Mitchell in EastEnders.

“Memory Walk is a great way to celebrate the life of a loved one with friends and family as well raise vital funds that will support others. It is a beautiful walk at Painshill Park and the turn-out has been unbelievable – it just shows how many people are touched by dementia.”

Other dedicated fundraisers donned their walking boots to raise money for Alzheimer’s Society, included Nerissa Davies and her brother Glen, whose father had dementia.

Nerissa’s dad, Richard Davies, was a television comedy actor who starred in shows such as Fawlty Towers and Please Sir, and was diagnosed with Alzheimer’s disease and passed away on 8 October 2015 – the same day as this year’s Surrey Memory Walk.

She said: “My dad was on TV his whole life, and now he can’t remember anything about his amazing achievements. Memory Walk is a great event.”

“Dementia is set to be the 21st century’s biggest killer.

“We are calling on family, friends – and furry four-legged supporters – to unite against dementia this autumn. Dementia devastates lives. Walk with us at Memory Walk and dementia won’t win.

“I would like to say a huge thank you to everyone who has helped make this year’s Memory Walk such a huge success.”