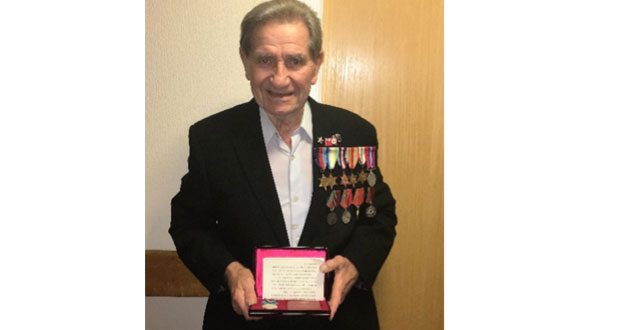 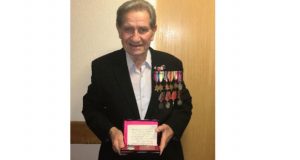 RUSSIA has recognised a Teesside World War II veteran for services on the “Arctic Convoys” in 1944 – named the “worst journey in the world” by Winston Churchill.

93-year-old John Podzukites, who lives at Ingleby Care Home, Ingleby Barwick, has been awarded the Medal of Ushakov by the Russia Federation.

Born in South Bank, Middlesbrough, John joined merchant vessel Fort Vercheres in March 1944, tasked with delivering essential supplies to the Soviet Union during the height of the war.

The perilous journey saw the convoy come under 18 attacks in two days from German U-boats and aircraft. Naval escorts fought off each attack, sinking three U-boats and shooting down six German torpedo bombers.

By May 1944, the convoy arrived safely at its destination without loss.

John spent seven years as a ships fireman during his twenties before leaving the Merchant Navy and joining one of Teesside’s largest employers, ICI, where he spent 22 years.

During his sea-faring career, he also saw action in the North Atlantic and Mediterranean.

John received the Ushakov Medal from his friend Billy McGee, who applied to the Russian Federation for the award on John’s behalf. A surprise ceremony was arranged by John’s daughter, Joan Coppard, and Billy at Don’s Bar in Stockton on Tees.

He said: “I had an inkling that I was going to get a medal as my friend Billy applied for the Ushakov medal for the Russian convoy.

“When I got presented with the medal I was really pleased and proud and I was very overwhelmed with the reception I received.”

The Medal of Ushakov was a Soviet military award created in 1944 and adopted by the Russian Federation following the dissolution of the Soviet Union in 1991.

The honour was given to sailors, soldiers and seamen for courage and bravery in the defence of the Soviet Union in naval theatres.