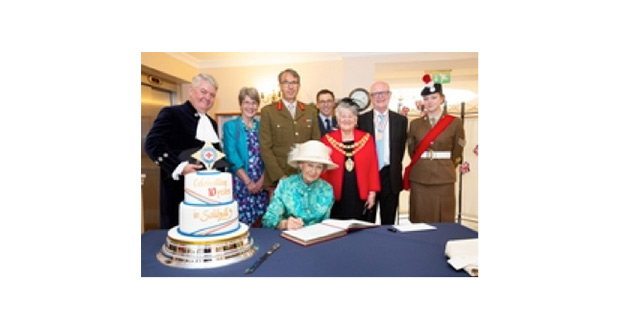 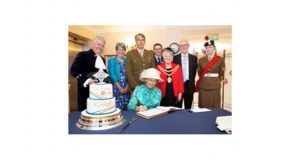 Residents and staff were delighted to welcome Her Royal Highness Princess Alexandra when she visited The Royal Star & Garter Home in Solihull. The visit was part of a day of celebrations to mark the Home’s 10thanniversary.

After introductions, the Princess was given a tour of the dementia care house where residents were enjoying flower arranging. Her Royal Highness then moved into the café-bar where she chatted to residents, all of whom were delighted to meet her. Resident Joan Taylor, who will be celebrating her 101st birthday in September, commented, “The Princess looked amazing, so elegant. She asked me how long I’ve been living at the Home. I told her the staff are fantastic at putting on these kinds of events and that they spoilt me silly for my 100th birthday.”

After cutting the exquisite birthday cake, Princess Alexandra was presented with a posy by Margaret Tennet, who has been a resident since 2012. Margaret’s husband, Brian, an RAF veteran, was one of the first residents of the Solihull Home and they both met the Princess during the Home’s official opening ceremony in 2008.

Nurse Olive Parantar was presented to Her Royal Highness along with two other staff members who have worked at the Home since 2008. Olive commented, “The Charity is so supportive, and days like today emphasise that. It was an honour to meet Princess Alexandra.”

The Princess has been closely involved with The Royal Star & Garter Homes after becoming the Charity’s President in July 1964.

Later in the day, the Home held a black-tie gala buffet where residents, staff and volunteers enjoyed delicious food and vintage themed music performed by local vocal trio The Bluebird Belles. After the buffet, the Home held its Annual Volunteer Awards, an event that celebrates all the volunteers who share their time and skills with residents.

Commenting on the day of festivities, Home Manager Cheryl Harbourne said, “I’m extremely proud of everyone for helping make today such a wonderful occasion. It’s lovely to be able to celebrate alongside the residents.”