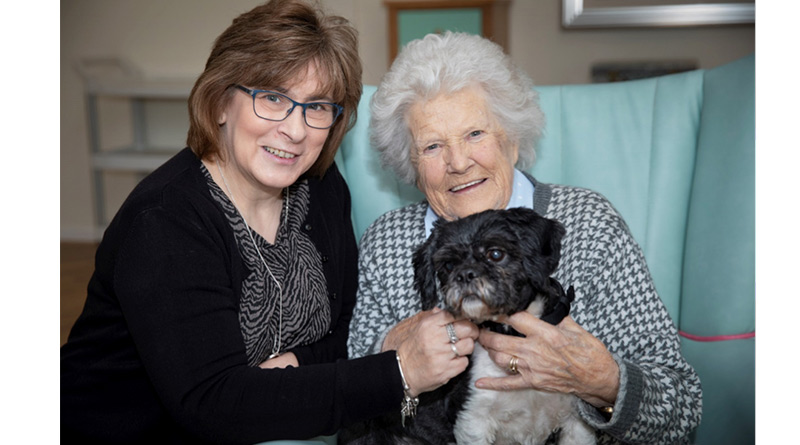 A lovable pooch called Fred whose future looked bleak after his elderly owner was unable to look after him has been given a new lease of life as a therapy dog at a care home.

The nine-year-old Shih Tzu is proving a massive hit with residents at Pendine Park’s Hillbury Care Home in Wrexham who’ve adopted him as one of their own.

Manager Cindy Clutton came to the rescue when’s Fred’s owner had to go into full time nursing care when she stepped in to offer the friendly ball of fur a permanent home.

After hearing of Fred’s plight, Cindy picked him up just in early January and decided to see how he would get on with Hillbury House residents.

She took him into work with her – and the rest is canine history.

Hillbury House resident Gwen Davies-Barrett, 91, is one of Fred’s biggest fans and loves seeing him around the care home.

She said: “Fred is amazing. I have had dogs all my life and just love seeing Fred in a morning with his tail wagging. He’s adorable.

“It’s just so nice having him around, it’s great for residents and the carers enjoy him being here too. It makes the place even more homely if that’s possible.

“I look forward to seeing Fred every morning and he always comes straight to me for a cuddle and a stroke. It’s just so lovely.”

Cindy said: “Fred took to it like he’d always been here. He potters around and spends time with residents who just love him to bits. I often find him curled up fast asleep on someone’s lap.

“It’s actually a huge tonic for residents too. They love the interaction with Fred and there is competition to see who can stroke him first every morning.

“When he gets tired or needs a break he heads for my office and curls up in his basket for a sleep. He’s landed on his feet to be quite honest.”

And Cindy takes Fred to see his former owner in Cae Bryn Nursing Home as often as she can.

She said: “The issue was her owner needed to go into full-time care and sadly, as much as he loved Fred, he was struggling to take care of his daily needs.

“I couldn’t see Fred go to a rescue centre so decided to give him a permanent home.  I’m told he is nine but I’m not sure and think he might be quite a bit younger than that. He’s got the energy of a two-year-old!

“And I have plenty of helping hands in caring for Fred when he comes to work with me every day.

“It can often be a four-legged friend like Fred or the myriad of other animals that visit out care homes – everything from donkeys to owls, and lots in between.

“The arts are also hugely important here, including  art classes and visiting musicians ranging from semi-professional pop singers to opera stars from Welsh National Opera and the world-renowned Hallé orchestra.”