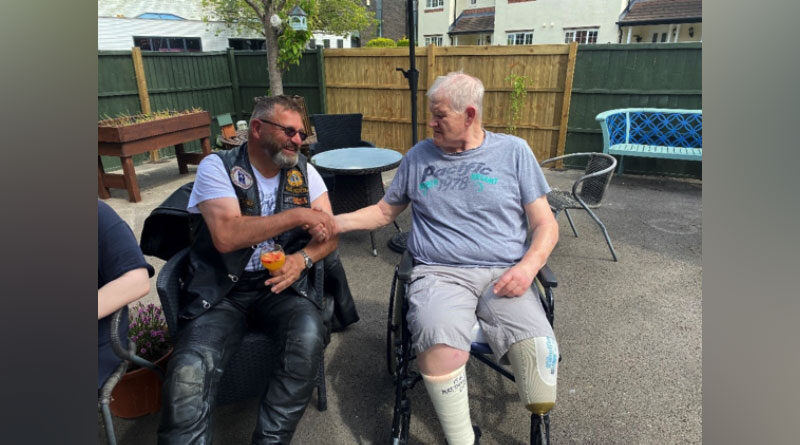 Two residents at a Knutsford based care home managed to relive moments from the past thanks to an initiative run by the home.

John Chrimes and Tina Challis live at MHA The Willows and are keen bike enthusiasts with both having owned and been around bikes during their younger days.

The Seize the Day initiative encourages residents to re-experience activities or events from the past or to do something they would like to do for the first time.

Amanda Drayton, activity coordinator at the home is a member of the Bikers Church and arranged for two members of the group Michael Davies along with her son, Daniel Drayton to visit the home with their motorbikes

Amanda said:
“I am a biker myself and once I started talking to both John and Tina about bikes, I realised we had similar interests.

“I asked them if they would like me to invite the Bikers Church to the home and show them their bikes and they were both very happy for me to do so.

“They really enjoyed the day, there was a lot of biker banter and they both had a massive smile on their face.

“They both said to me they never thought they would get a chance to do this once they moved into a home, so I am very happy for them both.

“John loves the mechanical side of bikes and was talking to both Michael and Daniel about the engines and how the bikes have changed from when he had one.

“Things like revving the engines, taking in the distinctive engine smells and sounds was a common theme of the day and there were plenty of smiles from both.

“I am hoping to arrange something like this again and ask other residents what they want to do.

“Both Michael and Daniel had a lot of fun, it was nice of them to come down and they definitely made John and Tina very happy.”