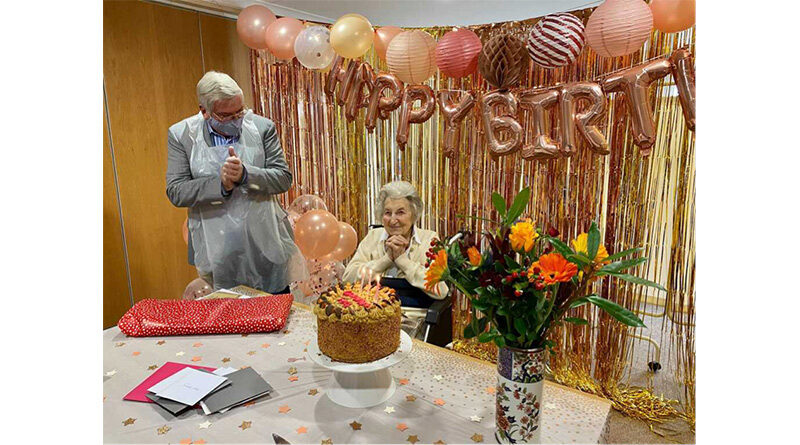 A resident who celebrated her 104th birthday at a Hertfordshire care home has shared some words of wisdom to the younger generations; ‘Life is short, so make the most of it!’

When asked what the secret was to living a long and healthy life on Saturday November 21st, birthday girl Joyce Birrell playfully told staff and fellow residents at Foxholes Care Home, near Hitchin, not to take life for granted, as even after surpassing a century in age, she felt time had flown by.

Although the current national lockdown and Foxholes’ stringent infection control protocols prevented what would usually be a big celebration involving family and friends from the community, the home worked tirelessly to still throw a birthday party, albeit socially distanced, to mark the occasion. The highlight of which included an emotional surprise visit from her son and close family members, who wore PPE and kept a safe distance.

Surrounded by birthday decorations, Joyce, who shares a 100-year age gap with her great grandson, was treated to gifts, a buffet spread of nibbles and a special singalong to some of her favourite songs from years gone by. Joyce also received a large birthday card full of messages from the Foxholes team, who plan to frame it for Joyce so she can see all her birthday wishes from those close to her on display.

Foxholes’ Neeti Gandecha and Adele Querele, who helped organise the party, said: “We may have to alter the way we celebrate special occasions due to the current climate, but that didn’t stop Joyce, her family and the residents and staff from having a great time. Joyce is an incredible personality to have around the home and her positivity is absorbed by all those around her.”

Born in Bicester in 1916, Joyce grew up in Hendon, north London, being the youngest of three sisters. Her father was a works manager at London’s Sunbeam Cars where he worked on Henry Seagrave’s world land speed record motor, which clocked over 200mph in 1927.

Growing up, Joyce and her family enjoyed trips to the south coast, where she was often found playing on a beached First World War German submarine.

Joyce attended London’s Kingsbury County School before getting a job at Heinz while training as a chemist, which ultimately led to her working at the Indestructible Paint Company, in Park Royal. It was there that she met her future husband Morris, who worked in the same laboratory testing paints.

At the outbreak of the Second World War, Morris left to join the RAF and served in Coastal Command, primarily in what is today Sri Lanka. During the war years, Joyce was a first aid ‘first responder’ and, when bombs rained down on Park Royal factories, she was one of the first to pull the injured out of destroyed buildings.

After the war, Joyce and Morris married and moved to Weybridge before settling in Stanmore, where, after losing a first son, they had Michael. Morris was promoted as a Director of Reckitt’s in Hull and the couple moved to live near Beverley, where they travelled the world well into retirement, before Morris sadly passed away in 1997.

A ferociously independent woman, Joyce delivered ‘meals on wheels’ to people in the area until everyone she was delivering to was younger than her! She even renewed her driving license online at the age of 95, before finally moving into Foxholes seven years later.

Michael said: “To me, mum was one of the unsung heroes of the Second World War. She always put others before her own safety and undoubtedly saved many lives. My mother has always had a very positive outlook on life and always has a smile. She’s lived an incredible life and when she moved into Foxholes, she was greeted with a warm welcome and was very happy and appreciative of the kind care of staff.”