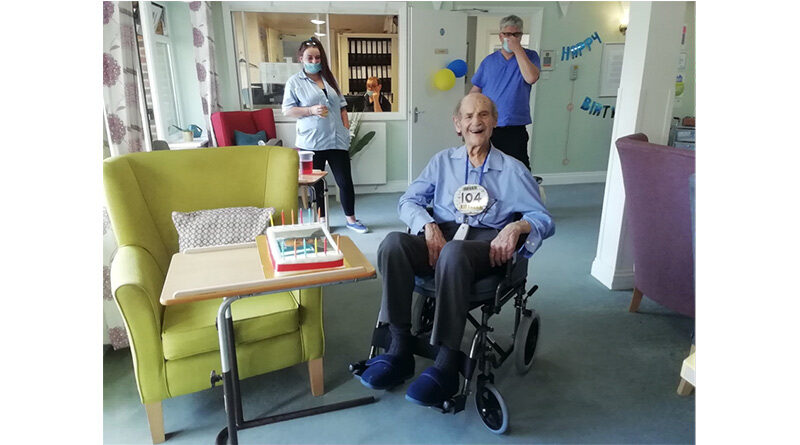 A resident at Patcham Nursing Home has enjoyed celebrating his 104th birthday alongside fellow residents, a relative and staff members at the home in Brighton.

The Sussex-based care home was filled with cards and balloons as Len Goldman marked his special day with a full English breakfast and a birthday cake featuring his favourite photo printed on the icing on the top.

Throughout the day, Len received lots of presents and birthday wishes, including a digital photo frame gifted to him by the home so he can display his favourite family memories from throughout his life. Len, who is a keen poet, was also surprised with special bunting, made by activities coordinator Paula Grout, which included the verses from some of the poems that Len has written on the front.

As part of the birthday celebrations at the home, Len was also joined by his daughter, Fleur, in the home’s garden for a special socially-distanced afternoon tea. Although Len’s wife was unable to attend the garden party on the day, Len said that he was delighted that he got to share his special day with his daughter, from a safe distance.

Len, who is a former history teacher, was born in Weston-Super-Mare in August 1916, and moved to Brighton as a child. In addition to his keen interest in poetry, he has published a number of books about his life growing up in Brighton and his experiences in India during the war.

Len said: “I had an amazing birthday; the staff members at the home really went above and beyond to make my day special. My favourite part of the celebrations was definitely seeing my daughter, Fleur. The period of restricted visits has been tough, but it felt very special being able to see her again to celebrate this milestone together.”

Pat Hurst, manager at Patcham Nursing Home, said: “Len is a fantastic resident and is always delighting us with stories about his life or poems that he has written. Len is an important member of the Patcham family and it was very enjoyable to be able to celebrate this milestone with him.”