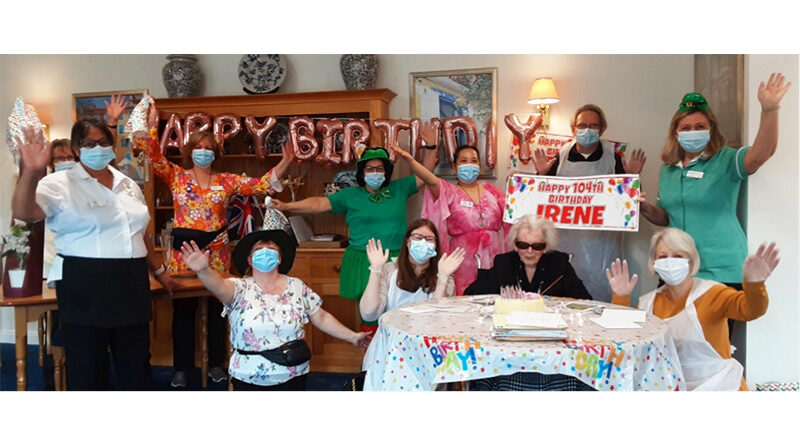 One of Hampshire’s oldest residents revealed her personal secrets of longevity as she celebrated her 104th birthday.

Great grandmother Irene Harris said enjoying lots of fresh air and avoiding salt in your diet were important pieces of advice for living to a century and beyond.

Born in 1917, a year before the end of World War One, Irene was speaking during her birthday party at Colten Care’s Kingfishers care home in New Milton.

Her earliest memories are of going for long walks in her home city of Birmingham with her parents and younger sister Joyce.

Childhood fun also featured ice-skating, fencing and being a regular passenger on a friend’s motorbike.

Irene said she could have attended a grammar school but her family couldn’t afford the price of the uniform and she started work in an office at the age of 14. She recalled that the word ‘teenager’ hadn’t yet been invented in the 1930s.

Being ‘good at numbers’ kept Irene in office work, and she also spent time serving in a munitions factory during the Second World War.

She later worked in a wallpaper shop and a Post Office in charge of greeting card sales.

After her retirement at age 75, Irene volunteered in a Marie Curie charity shop until she was 90.

As well as the UK, Irene and her second husband Tom lived in Australia for four years and travelled extensively across Europe and in the US.

In 1964, they moved to Highcliffe where Irene lived until she moved to nearby Kingfishers.

Irene has a daughter Linda, a son Peter, four grandchildren and a great grandson Wilf.

Joined at her 1960s-themed birthday party by family members under a safe-visiting protocol, Irene was naturally the centre of attention.

Kingfishers team members granted her birthday wish, playing and dancing along to her favourite song, Nancy Sinatra’s 1966 hit These Boots are Made for Walkin’.

On the secret of a long life, Irene said: “I must have inherited that from my parents, but I know that no salt and lots of fresh air will also do you good.”

Beata Brzozowska, Home Manager at Outstanding-rated Kingfishers, said: “It was a privilege to help Irene celebrate her special day. She is truly a remarkable lady.”