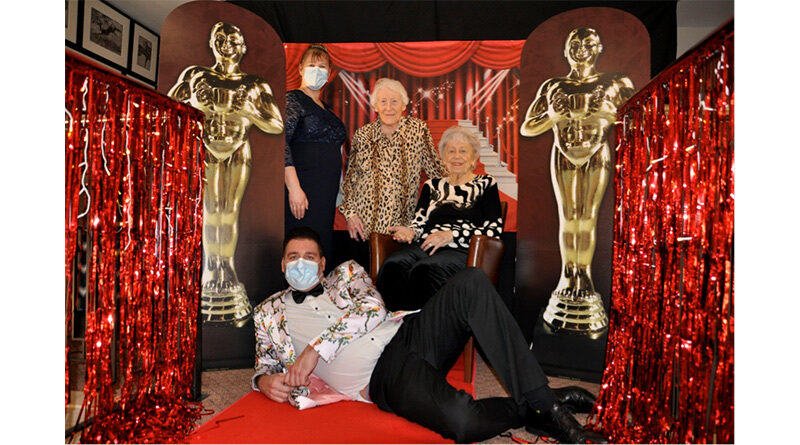 A sparkling taste of Hollywood magic and fun has brought Christmas festivities to life for dozens of care home residents.

Residents received star treatment with ‘paparazzi’ snapping them on arrival for pre-lunch drinks.

The buzz continued as they took their places in the hotel-style foyer and Audrey Hepburn dining room for a three-course lunch of smoked salmon cornet, roast beef and Black Forest chocolate roulade.

Eight dining tables named after icons such as Audrey, Marilyn Monroe, Clark Gable and Elizabeth Taylor sported Christmas cards and gifts of picture frames to put the red-carpet shots in when ready.

The fun was topped off with a film quiz and raffle in aid of the home’s two nominated charities, Poole Young Carers and Caring Canines.

Pat said: “This was a lovely day for us all and such a lot of work has gone into making it happen.”

Magdalena said: “It has brought back treasured memories of films I first watched and enjoyed years ago such as Gone With The Wind.”

Myrtle, a former professional pianist and chamber musician, said: “Don’t believe what some people say about care homes. I am so happy because the care here is out of this world. And it’s not just the care itself. The team actually like taking care of you, so it’s the atmosphere as well that goes with that.”

All 21 Colten Care homes across the south are staging special Christmas gala lunches for residents.

She is a member of the pop group Brotherhood of Man, famous for winning the Eurovision Song Contest in 1976 with the international hit ‘Save Your Kisses for Me.’

Avon Cliff in Bournemouth will donate all proceeds from its gala to charity BCHA, the Bournemouth Churches Housing Association.

The Aldbury, a dedicated dementia care home in Poole, is holding a Nutcracker ballet-themed lunch.

At Castle View in Poundbury, staff and residents are decorating one of their lounges in the style of a 1950s Christmas complete with childhood memorabilia and copies of period newspapers.

Newstone House in Sturminster Newton is inviting residents to a ‘Virtual Lapland’ experience with elves, snow machine and Santa’s grotto.

At Braemar Lodge in Salisbury, residents have been busy making lanterns for a forthcoming Christmas parade and carol singing tour of their garden.

A candlelit carol evening at Linden House, Colten’s Outstanding-rated dementia care home in Lymington, will include the reading of a Christmas poem by members of the home’s creative writing group.

Karen Grant A’ Court, Companionship Team Leader at Bourne View, said: “It was so special to give everyone a taste of what it might be like to go to the Oscars for real.

“All our homes are getting into the festive spirit with imagination and energy. The Companionship Teams have been highly creative in coming up with wonderful experiences and events for our residents.

“We’re making sure that, despite social distancing, our homes remain happy places filled with laughter, companionship and fun.”