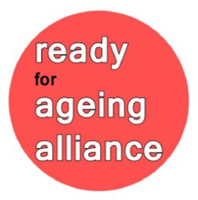 The Ready for Ageing Alliance has launched its manifesto for action entitled ‘Getting Ready for Ageing’.  The report calls on policymakers in Government and beyond to start engaging seriously with the trend towards longer lives, which is fundamentally changing our country and our world.

The Ready for Ageing Alliance was formed in 2013 following publication of the ‘Filkin report’  and its conclusion that we as a country were nowhere near ready for an ageing population. The aim of members Age UK, Alzheimer’s Society, Anchor, Carers UK; Centre for Policy on Ageing, the International Longevity Centre – UK (ILC-UK), Independent Age and Joseph Rowntree Foundation is to make the case for action to ensure that our society makes the most of our ageing population.

Our demography is changing significantly and quickly: by 2030 there will be 101 per cent more people aged 85 and over in England and 51 per cent more aged 65 and over, compared to 2010. Around one in three of all babies born in 2013 is expected to celebrate their 100th birthday. By the time of the next election, there will be 850,000 people living with dementia in the UK. This will rise to over 1 million by 2051.

The Ready for Ageing Alliance believes that the growing numbers of people in later life are a cause for real celebration but that we need to do a lot more to respond to both the challenges and the opportunities that longevity brings.

The manifesto sets out detailed recommendations for public policy covering housing; health & social care; the economy and communities and calls for Government to take the lead, with a single point of contact, at Cabinet level, responsible for age and ageing policy.

It also targets some big ‘policy own goals’ that sees us as a country currently hurtling in the wrong direction in terms of getting ready for ageing. For example, it says we must:

• Stop seeing ageing as being just about older people – if we wait until we are 60 or 70 to prepare we’ll have left it too late. That’s why the Alliance wants everyone to be sent a pack at 50 giving information and advice.

• Stop operating hospitals on a model designed for the past – Staff/patient ratios on hospital wards for older patients are often lower than on general wards, yet older people often need more help – e.g. to eat and drink

• Stop undervaluing the over 65s, who currently spend a massive £2.2 billion a week and contribute £61billion to the economy through employment, icaring and volunteering.

• Stop ignoring the fact that many older workers are forced to leave the labour market early.  Start building more flexible work opportunities to make it possible for family members of all ages juggle work and care for older relatives.

Caroline Abrahams, spokesperson for the Ready for Ageing Alliance said:

“Last month we set out how individuals had a responsibility to prepare for ageing. But the responsibility does not lie with individuals alone. Government is failing to recognise and address the long term challenges of ageing. Unless we wake up to the major challenges ahead we run the risk of poorer, more isolated pensioners, greater intergenerational tensions and an economy which is not maximising the potential of the older consumer.

“Our politicians need to ‘wake up’ and respond to our ageing population. There are so many opportunities to be had from an ageing society but without action now we will waste them.”

“Longer lives are a great gift and Government must lead the way in getting us ready for ageing. There is no senior Ministerial post, dedicated unit or Cabinet Committee in place and never has been under any administration. We fear this reflects disinclination among policymakers to grip the issue and commit to action.

“We are hugely underprepared for an ageing population – the time to act is now.  In the run up to the election we want every political party setting out ambitious plans to prepare for the demographic changes facing the UK. At the very least we need to stop ageing being seen as just being about older people. We are all going to age and we all need to tackle these challenges.”