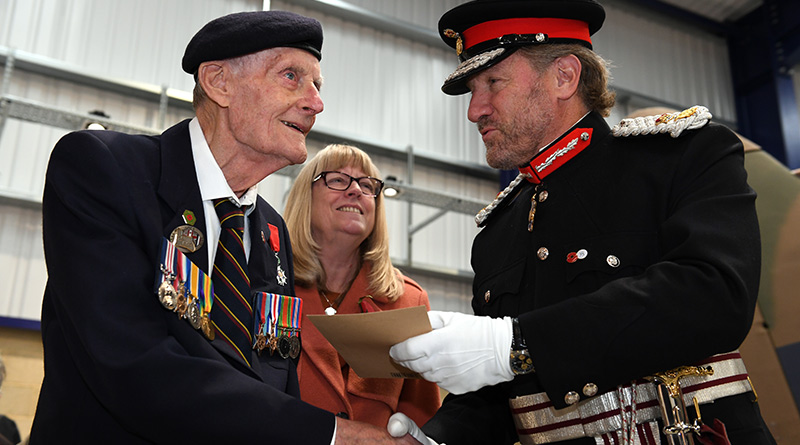 Badges were also awarded to Quantum Care residents in recognition of their service in the Women’s Land Army, the Women’s Auxiliary Air Force, the Army Parachute Regiment and the Royal Artillery’s Mobile Defence Force, among others. Stella Pearce, 85, who served in the Royal Naval Service, which she joined at the young age of 19, was one of the veterans honoured in the ceremony.

The event took place at de Havilland Aircraft Museum, which provided an awe-inspiring location with exclusive early access to the brand-new aircraft hangar. The museum holds an important collection of historic aircrafts, and for two weeks leading up to the event, residents’ Remembrance themed artwork was displayed in the museum.

The event is part of Quantum Care’s rolling programme, ‘Out of Sight but Not Forgotten’, which seeks to ensure that regardless if someone lives in a care home or is otherwise unable to attend a Remembrance event elsewhere in the country, their service will be recognised. Part of this campaign over the years has been to recognise not only those who fought in active service but also those who supported the war effort in some way.

Quantum Care was also honoured to have the Lord Lieutenant of Hertfordshire join the commemorations as he made a moving speech and handed out the Veterans and Women’s Land Army badges. Veteran Joseph Kelsey, 96, said he felt like a “celebrity” when people cheered for him as he accepted his badge from the Lord Lieutenant.

“This event has shown the importance of commemorating the efforts and sacrifice of our veterans and we are honoured to have had the opportunity to pay tribute to them.

“It has been a great privilege to bring together veterans living at Quantum Care homes, their families and other important members of the community to share memories. It goes without saying that we are all indebted to our veterans for their service and ongoing sacrifice.

“Not only are these commemorations important for our country, it is an incredible opportunity to celebrate the brave and selfless acts of our veterans. I also want to thank de Havilland Aircraft Museum for giving us the opportunity to scale up our ‘Out of Sight but Not Forgotten’ programme and ensure that more of our veterans receive the recognition they rightfully deserve.”

“It is an honour to get this badge today with so many others who also served receiving well-deserved recognition. I joined the Navy at just 19 years old and I was very proud to serve my country.”

“It is extremely important that we identify our veterans and acknowledge their service, that’s why it has been so great to work with Quantum Care to create the ‘Out of Sight but Not Forgotten’ campaign.”

“We are delighted to have worked with Quantum Care to host this Remembrance Day event, a testament to our ties with the care provider.

“It has been an exciting opportunity to provide such an appropriate location for this event. The history on display at the museum not only highlights de Havilland’s contribution to aircraft technology but also an important part of the history of British Aviation.”