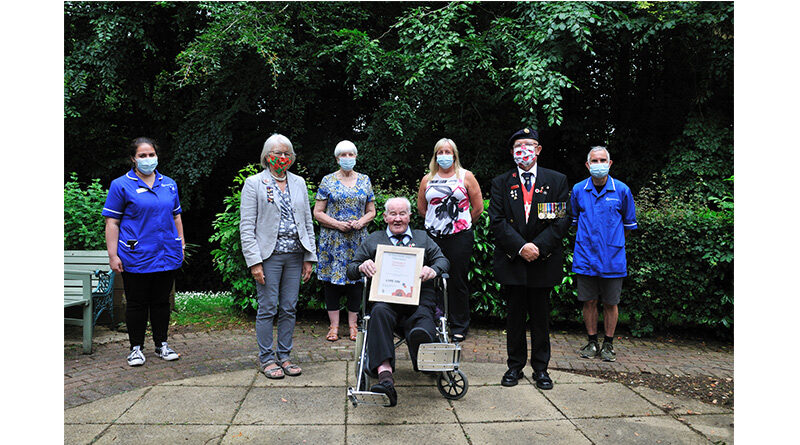 For decades now Les has been selling poppies for the Royal British Legion. He started this charitable work by going from door to door with his wife Penny selling poppies to local Stevenage residents and eventually they became a regular and much loved sight doing charitable work outside Coreys Mill Sainsbury’s. Year after year, come rain or shine, Les has plied his charitable trade without missing a beat and even deteriorating health and a global pandemic have been unable to break his stride.

Now a resident at Quantum Care’s Jubilee Court care home in Stevenage, Les turned his hand to the online world with the help of the Activities Team at the home, raising money for the Poppy Appeal through a Just Giving web page. The page raised over £1,700 in donations last year, breaking through his intended target of £500.

On the 17th June, in recognition of his tireless contribution, Les received three visitors at Jubilee Court care home. Two visitors were from the Royal British Legion and they were there on official business. For his outstanding support, Les had been awarded the Poppy Workers 25 Year Badge by the Royal British Legion’s Board of Trustees and a beautifully framed Certificate of Appreciation by the Stevenage branch of the charity. To deliver these awards in person were Poppy Appeal Organiser (Stevenage Branch) Retired Major Keith Greenough QVRM TD and Pat Jeffery, Royal British Legion Treasurer for Stevenage and Hertfordshire County.

The other visitor was Pat Holding, his long-time friend who he met during his charitable work. Les and his wife knocked on Pat’s door one cold and dark evening and were very quickly invited in for a hot cup of tea and refreshments, which was the beginning of a long-lasting friendship. Pat attended Buckingham Palace with Les at the invitation of the Queen in 2014 for their services to charity.