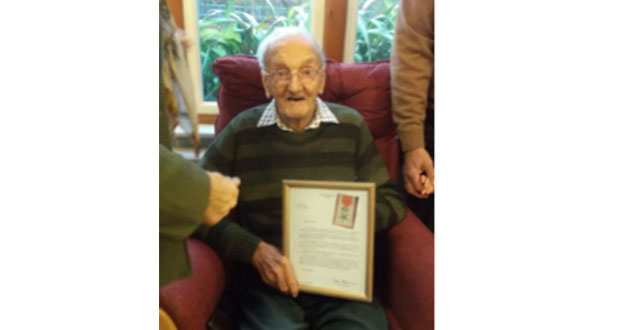 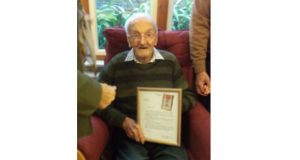 A Petworth man has been awarded the highest possible French order of merit for his involvement in the liberation of France during World War II.

George Goodchild, 95, originally from Wisborough Green, celebrated the honour of receiving the title of Chevalier and the Ordre National de la Legion d’Honneur medal at a special event at Rotherlea care home in Petworth, surrounded by his friends, family, residents and staff members.

George’s family decorated a special room at the care home with blue, white and red paper chains, French flags handmade by residents and maps of France. Boards were also on display detailing George’s life history and involvement in World War II. George’s daughter, Sheila Atkinson  also made a cake with a replica medal made from icing.

Speaking at the event, Sheila said: “Dad was thrilled to receive the medal and was so excited to share the good news with us and everyone else at the home.

“He truly is an incredible man who has survived the horrors of war and lived to tell the tale. We’re all glad that he has been recognised in such a prestigious manner and it only felt right that we all came together to mark this important honour for Dad. Three generations were at the party to present him with the medal, which proved to be the icing on the cake for him, saying that the memory will ‘last him a lifetime’.”

George enlisted on 24th April, 1941 and joined the Royal Army Ordnance Corps. He was posted at several barracks in London before volunteering for oversees duty and boarded a train to Southampton in 1943 to begin his journey across the Channel to Arromanches, Normandy, or ‘Gold Beach’ as it was code-named. Gold Beach was one of the five areas of the Allied invasion of German-occupied France during the Second World War, as part of Operation Overlord. British casualties at Gold Beach are estimated at 1,000 – 1,100 men.

Debbie Embleton, manager at Rotherlea care home, said: “We were all astonished when we found out that George was the recipient of such a prestigious military honour. He is a fantastic gentleman and we are all really proud to be a part of his special day to recognise his achievement.”