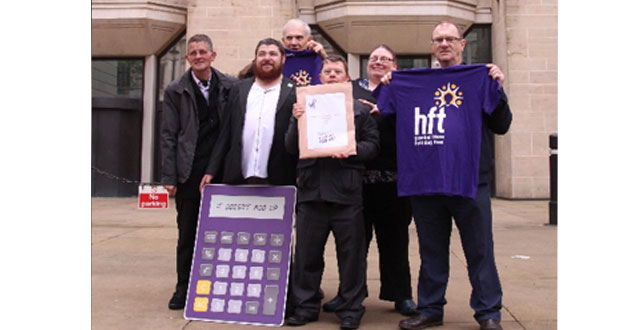 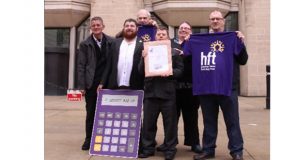 Hft, a national charity supporting people with learning disabilities, has presented a petition to the Government calling for an increase in funding for adult social care.

More than 3,850 people have signed the petition which was launched in response to the introduction of the National Living Wage (NLW), as part of Hft’s It Doesn’t Add Up campaign, to raise awareness of the funding pressures faced by social care providers.

The NLW, which became law in April 2016, entitles anyone over the age of 25 to a minimum of £7.20 an hour, rising to £9 an hour by 2020.  While Hft fully supports the payment of the National Living Wage, the charity is campaigning to have the Government meet the shortfall faced by providers from the increased salary costs. The charity believes this is vital to ensuring the range of care and quality of support offered can continue so vulnerable people with learning disabilities are not left without support.

Three members of Hft’s speak out group, Voices to Be Heard, which represents the views of the people supported by charity, travelled to London to stress to the Government that the current funding measures, including the introduction of the social care precept, do not go far enough.

As the responsibility for social care has now been split between three secretaries of state the group visited each of the relevant ministerial departments to demonstrate their concerns.  The tour began at the Department for Work and Pensions where a copy of the petition was left for the Minister for Disabled Persons, Penny Mordunt.  Copies were also left at the Department for Business, Energy and Industrial Strategy for Margot James and The Department of Health for David Mowat.

In the afternoon the members of Voices To Be Heard attended a Parliamentary reception where they had the chance to share their concerns about the funding deficits.

The event centred around the charity’s newly launched report, undertaken by independent economics consultancy, Cebr, analysing the impact of the financial pressures facing the adult social care sector, with a specific focus on learning disabilities.  Among the key findings of the report, which combines survey analysis from social care providers and financial modelling, is that based on the current level of service an uplift of at least five per cent per year is required to meet the rising cost of adult social care services.

Billy Davis, Policy and Public Affairs Manager for Hft said the Parliamentary event was an opportunity to bring this issue to the forefront of the government’s agenda.

“I would like to thank everyone who signed the petition, which provides a clear demonstration of the strength of feeling around this issue.   Despite repeated warnings from regulators and industry bodies around the fragility of the sector, the absence of social care from the Autumn Statement, means the need for additional funding is now greater than ever.

“While we fully believe in seeing our staff paid more for the excellent work that they do, the current funding measures, including the introduction of the social care precept, do not go far enough to address the shortfall.

“We hope that our petition shows ministers the growing support for a properly funded social care sector to ensure that some of the most vulnerable people in our society are not left without vital specialist support.”

To find out more about Hft please visit www.hft.org.uk