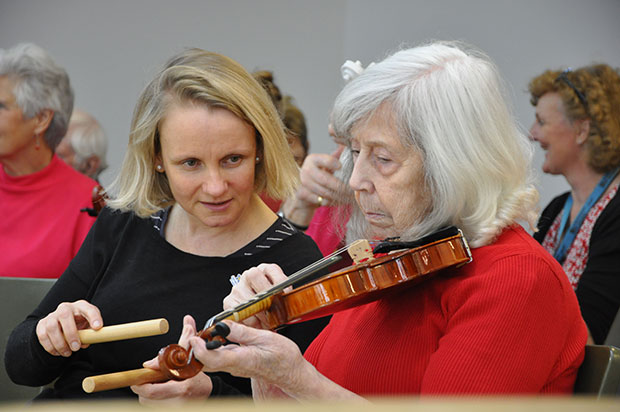 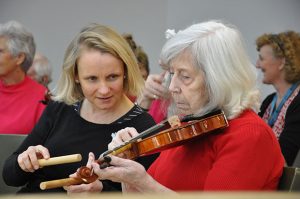 An 85-year-old care home resident living with dementia has been enabled to learn the basics of violin and play her first live concert with a community music group.

Great great grandmother Pearl Durrant, who has never played a musical instrument before, only began practising with Bournemouth University’s BUDDY orchestra in January this year.

Led by three local professional musicians, the group involves 20 players and carers who are living with dementia at home or attending day centres.

Pearl is the only member who lives in full-time residential care. She is a resident at Linden House, Colten Care’s specialist dementia care home in Lymington, Hampshire.

Since January, Pearl has been accompanied by Colten Care Activities Organiser Fiona Pritchard to and from the group’s weekly practices in Bournemouth.

The culmination was a one-hour lunchtime public concert at the University’s Poole House atrium under the direction of conductor and double-bass player Andy Baker, John Murphy on viola and Fiona’s husband Kevin Pritchard on piano and French horn.

Pieces included Ravel’s Bolero, Habanera from the Bizet opera Carmen and the theme tunes from Jaws, The Archers and Desert Island Discs.

Andy, who guided the group with a flip-chart of basic notation, said: “We do a lot with percussion and repetition and Pearl is happy to try solos and is certainly exploring the instrument. It’s about the musical experience but there is also a big social and pastoral element too. Pearl always approaches us with a beaming smile. She wants to be part of the group.”

Speaking after the performance, Pearl, a former nurse from Coatbridge near Glasgow, said: “I really enjoyed it. It was great fun.”

Fiona said: “We spoke with Pearl and her family about getting involved with the group because, although she hasn’t played an instrument before, she does love music. She always dances when we have an entertainer in and she was happy to give violin a go. She’s also very comfortable going out of the home. When we drive back to Linden House from the weekly practices, I’ve noticed that Pearl is reminiscing more, talking about her parents, husband and other memories. The experience of playing seems to enhance her thought processes. She has also really bonded with the other players so she’s getting a lot of out of it socially as well as musically.”

Pearl’s daughter June Schutrups, who was in the audience for the concert, said: “It’s fantastic to see mum playing music for the first time and having a great experience with such a lovely group.”

Launched two years ago as an Arts Council-funded research project, BUDDY’s key aim has been to gauge the extent to which people with dementia can learn something new.

Michelle O’Brien of the University’s Ageing & Dementia Research Centre said: “Everyone respects and supports one another and feels very much part of a group. Some may attend unsettled or not knowing what to expect but they leave looking and feeling happy. They have a sense of pride having expressed themselves by playing an instrument, clapping, humming, dancing or just listening.”