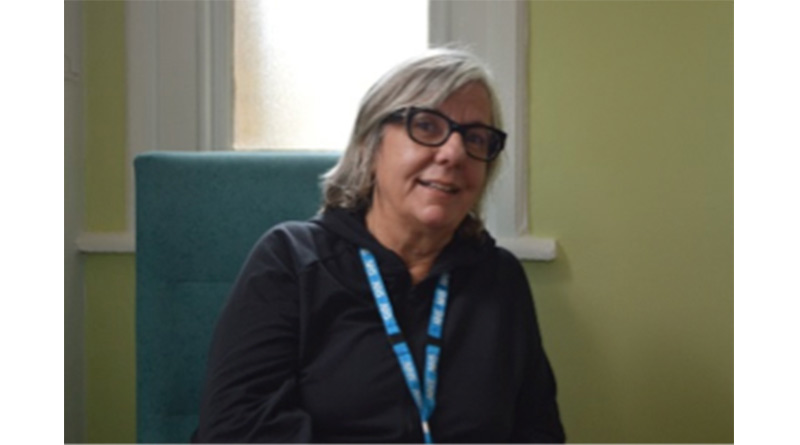 Inpatients on Kershaw Ward at St Charles Hospital have worked with an award winning medical illustrator and artist, to create dementia-friendly artwork for the hospital ward.

Patients took part in four workshops with the artist Merlin Strangeway, where they took inspiration from nature. They drew the objects which the artist then painted onto stretched silks.

It was part of an art project organised by Tracy Hibbert, Art Therapist at Kershaw and Redwood Wards, after she met with colleagues to discuss the importance of making Trust sites dementia friendly.

People with dementia can benefit from certain features in their environment, to avoid confusion and reduce the risk of falls.

“I don’t think it takes much to imagine it must be a daunting prospect being on a psychiatric ward so I think creating warmth and feeling a level connection is quite important,” said Tracy.

“We are living longer and it’s more likely that people will be developing dementia so it’s important that we think carefully about their environments.”

‘Thank you for listening’

Tracy suggested having an artist in residence so she put out a call out and received over 30 applications. They were shortlisted and then interviewed. She chose Merlin, who spent time with patients discussing the feelings and thoughts prompted by the flowers and natural objects she brought in.

“I asked for patient’s help in picking out which flowers had meaning to them, and which colours they felt were uplifting and soothing,” said Merlin. “We spent two hours arranging the flowers into order, and as we did so I learnt a lot about the patients’ experiences.

“They shared long term memories of growing up after the war, of gardening, of evacuation, of rations, of food, family, place, of belonging, of ownership.”

Patients said the work “brightened up the ward,” and Tracy said they were empowered by the experience.

One patient who was involved in the project said, “I’ve found life very difficult since I came here. It’s so nice to feel I can help and I thank you for listening to me.”

They produced three pieces of artwork, but the project also led to other changes on the ward.

Tracy said, “When you look at the three images you can see these are chosen by some of the patients, and comments are made about the objects but they were also thinking about their mental health and how they might feel about their own lives.”