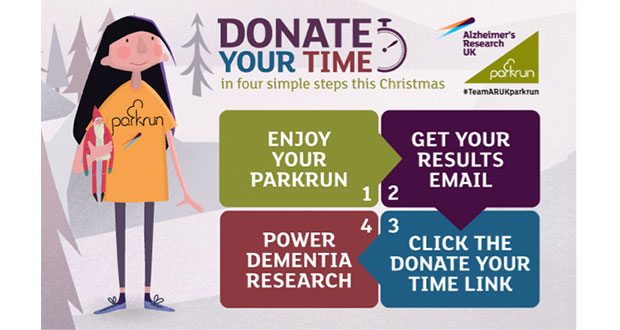 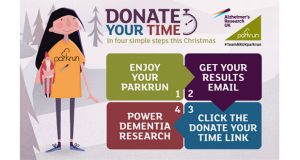 The fundraising campaign Donate Your Time is being launched as a result of the public’s overwhelming response to the charity’s Christmas advert, Santa Forgot.

The animation has taken social media by storm with #SantaForgot trending on Twitter as dozens of celebrities spread the word, including the animation’s narrator Stephen Fry. Santa Forgot has now been viewed on social media more than six million times.

Over the four weekends of December, anyone participating in parkrun, which provides free, timed 5km runs across the UK, will have the opportunity to convert their finish time into a one-off donation to Alzheimer’s Research UK, parkrun’s official charity partner.

The money raised will help fund vital research into treatments and preventions for dementia.

To donate, parkrunners can simply click on the link in their results email after any parkrun from Saturday 3 December to Christmas Eve, or go to www.alzheimersresearchuk.org/donateyourtime.

On the website there is an option to halve or double the donation, or make a donation of the giver’s choosing.

“Alzheimer’s Research UK is on a mission to defeat dementia. We need each and every parkrunner to help us change the lives of those living with the condition by taking part in Donate Your Time this Christmas.

“Of course anyone who doesn’t live near a parkrun but would still like to give is also welcome to donate their time from any of their runs this Christmas.”

Alzheimer’s Research UK’s Santa Forgot is centred around the character of a young girl called Freya, in a world where the magic of Christmas has been lost because Santa is living with the effects of dementia and no longer visits children across the world on Christmas Eve.

The film highlights the varied symptoms and social isolation of dementia and raises awareness that the diseases that cause it, most commonly Alzheimer’s, strike indiscriminately and really can affect anyone – even Santa.

On learning about Santa’s condition, Freya travels to the North Pole. She offers her own support and re-mobilises the redundant elves as researchers, explaining her belief that ‘if Santa has a disease, ‘research can find a way to fix it’. To watch the animation go to www.alzheimersresearchuk.org.