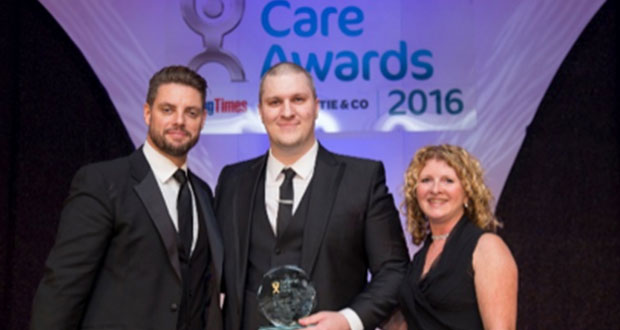 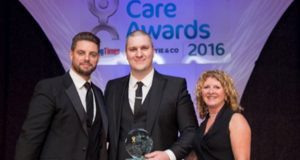 A Blackburn care manager has been recognised as Britain’s best, winning the Best Dementia Care Manager Award at the National Care Awards. This is the third national award for the dementia care home this year.

This is the third national award that Phil Benson and his team have received since the specialist care home opened in May 2016. Earlier this month, EachStep Blackburn won Best Dementia Care Home at the National Dementia Care Awards, where Phil also collected the Best Dementia Care Manager Award.

EachStep Blackburn is part of national charity Community Integrated Care. The home has been developed in partnership with Blackburn with Darwen Council with the aim of delivering the highest standards of specialist dementia care, creating a hub for the local community, and bringing together local people and groups.

The National Care Awards, backed by Caring Times, are the leading accolades in health and social care. The event took place at the London Metropole Hotel, hosted by Boyzone’s Keith Duffy.

Phil was praised by judges because he ‘shows great vision in helping residents fulfil their dreams, has the ability to draw from personal experience and a desire to set new standards and drive innovation in the sector.’

Phil has created a service where the people supported are encouraged to follow their passions. Some residents have paid employment opportunities at the home, people supported can fulfil their cultural and faith beliefs out in the community and volunteers regularly visit the home, supporting people to enjoy their hobbies and interests.

Phil Benson says: “It is an incredible honour to be named Best Dementia Care Manager. I do this job because I love it, so I never expect acclaim or recognition. It was a genuine shock and I’d like to thank my team and all of our partners who have helped us to make EachStep Blackburn the success it is.”

Paula Spence, Director of Older People’s Services at Community Integrated Care, says: “We are so proud to see Phil recognised at these prestigious awards. He has worked tirelessly in making EachStep Blackburn a national model of excellence for dementia care and community engagement. Phil is a truly inspiration leader.”