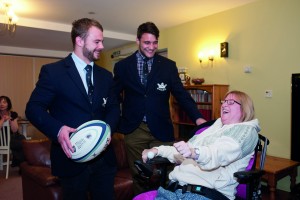 The 134th Men’s Varsity Match will take place at Twickenham Stadium on Thursday, 10 December, with Oxford renewing their age-old rivalry with Cambridge.

“Meeting the residents was as enjoyable for me and the players as we expect playing the match itself will be,” men’s captain George Messum said.

Women’s captain Carly Bliss added: “This year will be the first time the women’s team have ever played Varsity at Twickenham, but being able to help the residents here feels just as important.”

The charity is also selling tables to parties looking to be part of an audience with Alastair Hignell and other rugby internationals and will collect donations at the match.

Alastair, a Trustee of Leonard Cheshire Disability and former Cambridge Captain, said: “We hope those that have enjoyed England’s hosting of the Rugby World Cup might be encouraged to attend the latest edition of rugby’s oldest fixture when Oxford again takes on my old side Cambridge on December 10.”

Leonard Cheshire Disability, which hopes to raise £65,000 from the partnership, has historical links with Oxford. Its founder, Group Captain Leonard Cheshire, a highly decorated British RAF pilot in the Second World War, grew up in the city and went to the Dragon School.

In 1936, aged 18, he returned to his hometown to study Jurisprudence at Merton College, Oxford.

Leonard Cheshire Disability supports thousands of disabled people every year to live as independently as possible. It provides care and support services across the UK, including at Agnes Court and John Masefield House near Oxford and The Manor near Cambridge.

The ambition of the charity’s founder was to provide expert care and support to any disabled person anywhere in the world, and of giving them dignity and respect in everything they do. That drive remains alive in Leonard Cheshire Disability today.