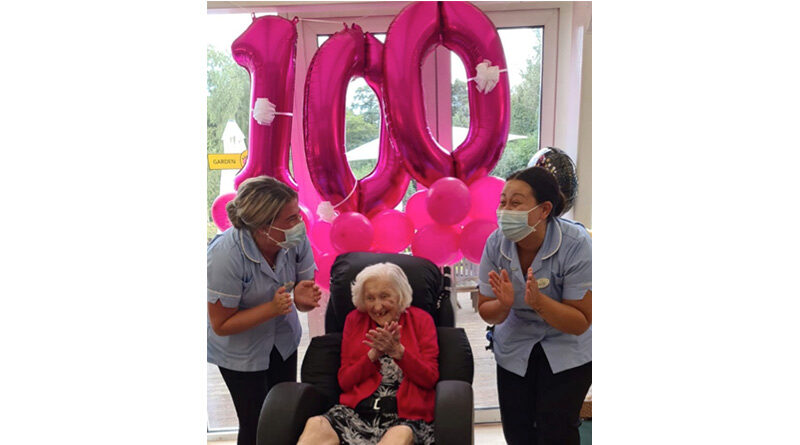 Following an appeal to the community to send 100th birthday cards to Barty House Nursing Home resident Ivy Watson, she has been absolutely inundated with cards, balloons, birthday cakes and hampers.

Kind-hearted staff at the Bearsted-based nursing home were keen to help make Ivy’s big day as memorable as possible, and originally hoped that she would receive a card for every year of her life in time for her 100th birthday on 28 September. But, thanks to the incredible generosity of local residents and businesses, as well as those much further afield, Ivy has so far received a whopping 723 cards – far surpassing anyone’s hopes or expectations!

The cards and good wishes have poured in from local schools, nurseries, brownies and girl guide groups in the Maidstone area – Oaks Primary Academy generously sent 100 – as well as from Royal Mail offices around the country and via Age UK initiative Postcards of Kindness. Others came from overseas, even as far as Australia and the United States! Local businesses sent balloons, cakes and hampers, and Ivy’s happiness was made complete by the surprise appearance of a Shetland birthday pony, courtesy of Maidstone-based Pukka Ponies Equine Rescue.

All the decorative cards now line the hallway and corridors of the home, as well as the walls of Ivy’s own room.

Ivy, who has very few relatives and is now bed restricted, was wheeled into the home’s lounge for her very special birthday celebration, featuring local singer and musician Rick Stills. She was so bowled over by all the cards, balloons and gifts that she asked staff several times: “Are you sure these are all for me?”. When assured that it was, indeed, all for her, she said: “It’s all so lovely!”.

She says: “Ivy had a wonderful day and a magical party that she will never forget. She was our queen for the day, and this couldn’t have been done without the heart-warming kindness of individuals and businesses in the local community – and far beyond. We cannot thank you all enough for your incredible generosity.” She adds: “Yesterday was the proudest moment of my career!”