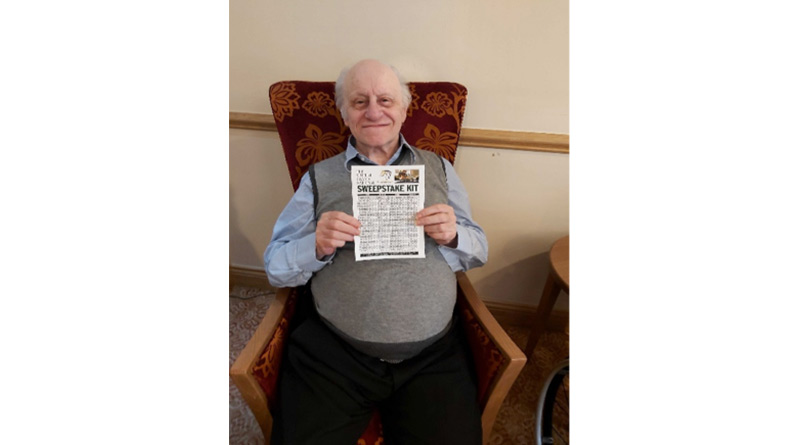 When 83-year-old Alfred Lewis, a horse racing fanatic who had boyhood dreams of becoming a jockey, was surprised by staff at his care home that they were taking him to his first-ever Grand National, the former British Army chef was thrilled at the prospect of attending the sport’s most famous race.

Since that happy day though, the coronavirus pandemic has seen all major sporting events cancelled, including the Grand National, leaving Alf stuck inside his care home with his horse racing dream unfulfilled.

Thanks to the power of technology though, the race took place in virtual form, so staff at the home, Foxholes Care Home, in Hitchin, Hertfordshire, decided to recreate the thrills and spills of Aintree – giving Alfred as close an experience to a day at the races as they could given the circumstances.

Other residents joined Alfred as he waited for the drama to unfold on a TV set-up in the home’s lounge. Clutching mock bookies tickets, while the home took a (non-monetary) sweepstake of horses, Alf also got first pick – helping him to get into the spirit of the race.

After Potters Corner won the exhilarating steeplechase, an excited Alf, said: “What a surprise that was! I didn’t expect to feel as if I was there but the home certainly did their best to try and recreate the atmosphere. I was made to feel as if I was right in the thick of it. It might not have been the real thing but I can’t thank the home enough for trying to fulfil my dream, despite what is going on in the world at the moment.”

The initial surprise of wanting to take Alf to the Grand National came about through the home’s Experience Wishes scheme, which sees staff collect residents’ unfulfilled wishes, which can be anything from flying to diving, before trying to make them come true.

Neil Gandecha, Estate Manager at Foxholes, explained: “Alf regularly tells us how we always dreamt of becoming a jockey as a child, and he’s always fond of watching live racing, so we decided to surprise him by taking him to his first Grand National. Obviously that wasn’t to be (we’ll look to go next year!), but after hearing a virtual race was going ahead, we thought why not try and bring the races to him. The staff have been doing a brilliant job of keeping spirits up during the lockdown, with an array of activities taking place every day. Alf’s experience is a testament to the wonderful job that the team have been doing, going above and beyond the call of duty.”

The 2020 Virtual Aintree Grand National involved the intended Grand National runners being re-invented in computer-generated imaging by some state-of-the-art technology. The virtual race had clever algorithms fed into it, including the likely weather conditions on the day, ground, recent form, track form, past Grand National trends, weight, and age.

Alf concluded: “I thought the race was brilliant, it was made to look so real and the atmosphere in the lounge made it that bit more special. If anything, it’s made me more excited for next year’s race now!”