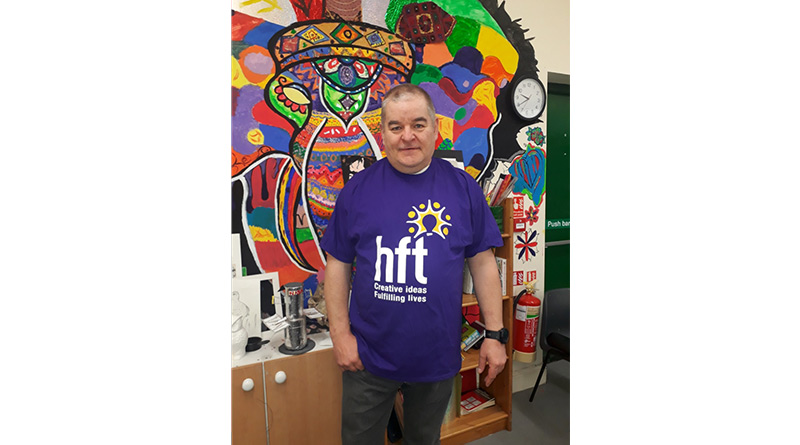 A support worker from Pegswood has been recognised for his lifesaving first aid action earlier this year while at work supporting people with learning disabilities.

Kevin Hope works for national learning disability charity Hft at one of its day opportunities services in Morpeth, where he supports adults with learning disabilities to identify their skills and interests within their communities. While at work in February this year, the support worker noticed that someone who regularly attends the service was choking on her lunch. The 50 year old leaped into action and performed an abdominal thrust, followed by a further two thrusts, which eventually dislodged the food. When paramedics arrived to check the individual was safe and well, they praised Kevin’s quick thinking during a very stressful situation.

Kevin’s career as a support worker began 15 years ago when he was looking for a change of direction from his role as a security guard at a Newcastle shopping centre. After looking for a job with more flexible hours and a better work life balance, Kevin applied for a role at Hft where he could combine his previous horticultural experience with making a difference to the lives of vulnerable adults.  Over a decade and a half later, Kevin has become a well-established member of the team, who counts introducing a pioneering new outdoor programme among his many achievements. The support worker set up the Happy Diggers initiative nearly three years ago and now spends his days supporting four individuals to grow seasonal produce on an accessible allotment. The group has gone from strength to strength, with members relishing the fresh air and exercise, as well as enjoying a boost in confidence thanks to their new skills.

Kevin Hope said: “I didn’t have time to hesitate when I saw someone in trouble. The first aid training course I did last year came back to me immediately and it was only afterwards that I realised the enormity of what had happened.

“This is definitely one of the most memorable moments of the years I have spent as a support worker. This job is always rewarding – you can look back at the end of the day at all the things you’ve helped people to achieve. There’s also a great sense of camaraderie and teamwork between members of staff.”

Rita Love, Day Services Manager at Hft, said: “Support workers like Kevin make such a difference to the people they support by providing both practical and emotional support so that they can live the best lives possible. Kevin is one in a million, both in terms of his response during an emergency and his role leading the Happy Diggers group. We’ve been pleased to recognise his heroic actions with our staff reward scheme.”