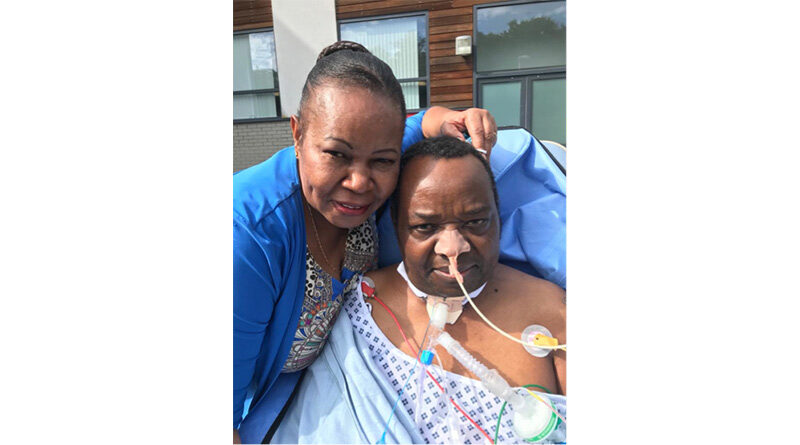 A nurse who almost lost his life to COVID-19 has been guaranteed his salary until the day he retires.

Raymond Mwasaru, 64, from Bedford, spent 45 days on a ventilator in an induced coma and suffered kidney failure after contracting the virus in May last year.  His wife had been told to come to say goodbye because doctors didn’t think he would survive.  Yet he miraculously turned a corner and, after leaving hospital in July, he is recovering at home.

Now his employers, specialist neurological care providers, PJ Care, have told him they will continue to pay his salary until his retirement in two years’ time, whether he’s able to return to work or not.

“I’m so grateful, it has really helped us as a family,” said Raymond.  “PJ Care have been so supportive the whole time I’ve been unwell.  They would ring my wife, Alice, every couple of weeks, and even now they still call to see how I am doing.”

Raymond has been a staff member at Bluebirds care centre in Shenley Lodge for six years.  A registered learning disability nurse, he works with residents who have degenerative neurological conditions such as Parkinson’s disease, Huntington’s and various forms of dementia.  PJ Care runs a second care centre in the city, Mallard House, and a third in Peterborough.

It’s Chairman, Neil Russell, said supporting Raymond was the right thing to do.

“Raymond has given so much to our residents here, he’s a very valued member of the team,” said Neil.  “We named him ‘Clinician of the Year’ in our internal staff awards two years ago.  He has been through the most awful experience and we felt we couldn’t add to his concerns.  Giving him financial peace of mind was something we could do and we had to do.”

Raymond’s wife, Alice, is also a nurse and said the effects of COVID are still with him.

“When he left intensive care, he couldn’t sit up, he couldn’t walk, and I had to be there every day from 2pm to 7pm to encourage him and motivate him with his physiotherapy.  He was very frustrated but our grand-daughter, Naima, wanted him home for her ninth birthday at the end of July.  He made it with two weeks to spare!

“He gets short of breath and can’t talk for too long.  He struggles to lift his arms above shoulder height and he still experiences coughing episodes because of scarring to his lungs.  He also worries about being reinfected.”

Raymond has no current plans to go back to work as he still has some way to go in his recovery, but if he does return, it will be to a non-clinical role.

“Nurses are very valuable and we would love to see Raymond back but it will be his decision,” added Neil.  “All our staff have gone to massive lengths to keep our residents, and each other, as safe as possible.  They are an incredible team and we take great pleasure in returning the care by looking after them in any way we can.”