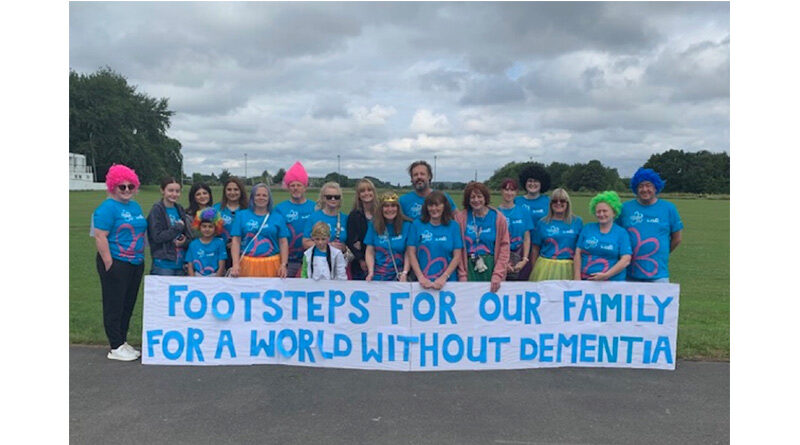 EMPLOYEES at Nottinghamshire-based care group Church Farm Care have raised more than £2,000 for Alzheimer’s UK after walking the equivalent of more than five marathons across the past two weekends.

Organised by house leader Nikki Foster, 45 members of the team at the group’s Skylarks home spent the last two Saturday mornings walking a 3.1 mile lap of the lake at Holme Pierrepont, racking up a total of 139.5 miles between them.

Skylarks, located in West Bridgford, is one of Church Farm Care’s four homes in Nottinghamshire and specialises in dementia care.. The team chose Alzheimer’s UK as its charity for their own special memory walks and even wore a photo of one of Skylarks’ family members on their t-shirts as they walked.

Nikki said: “The original plan was to get enough team members together to walk the equivalent of one marathon by lapping the lake at Holme Pierrepont. However, we were absolutely overwhelmed by the number of people who wanted to take part, with 45 members of staff responding to my original call for volunteers, meaning our total would actually be just shy of 140 miles – more than five marathons.

“What has also blown me away is people’s generosity. Our initial target was to raise £500, but just a few hours after setting up our Facebook donations page we’d already exceeded that amount. Since then the donations have continued to pour in and we’re absolutely thrilled to have raised more than £2,000 for a charity that’s so close to all of our hearts.”

The memory walks were initially meant to take place in March but had to be pushed back due to ongoing Covid-19 restrictions, with the rearranged events taking place on 26 June and 3 July.

Rachel Squire, home manager at Skylarks, said: “Nikki has done a fantastic job, organising the event from start to finish, and we couldn’t be more proud of her for raising such an incredible amount of money for Alzheimer’s UK.

“Her dedication to our family members at Skylarks is a real testament to how much she cares about those living with dementia and we’d like to say thank you to all the staff who took part and, of course, to everyone who donated as well.”