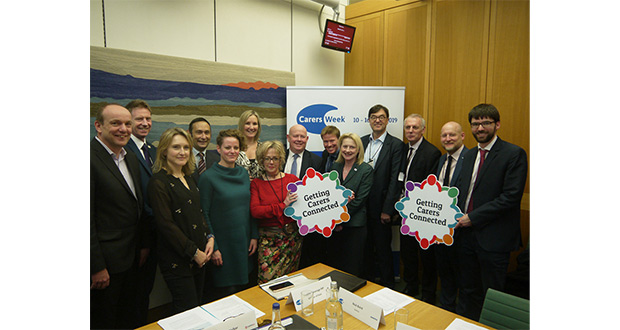 One in three unpaid carers (32 per cent) looking after a loved one who is older, disabled or seriously ill has felt lonely or isolated because they are uncomfortable talking to friends about their caring role.

A further third (32 per cent) say they feel socially isolated at work because of their caring responsibilities.

Despite the huge contribution of unpaid carers to society, an overwhelming majority (74%) feel their caring role isn’t understood or valued by their community. An unwillingness to talk about caring has for many carers created a barrier to their inclusion at work, home and in public life.

For lots of people, looking after a loved one is ‘just something you do’ meaning many do not recognise their caring role straight away. Nine in 10 carers (91 per cent) say they have missed out on financial or practical support – or both – because they didn’t identify themselves as a carer. Three quarters (78 per cent) reported suffering from stress and anxiety as a result of missing out on support.

It was an opportunity for charities to highlight the support of the UK’s 6.5 million carers and their enormous contribution to society and the economy.

The roundtable kicks off the theme for Carers Week 2019, the UK’s annual drive to raise awareness of caring, which takes place between 10th and 16th June 2019. Celebrating its 25th anniversary, Carers Week 2019 will receive headline sponsorship from British Gas, part of Centrica, and will focus on ‘Getting Carers Connected’ to important support services, advice and information as well as family and friends.

“A reluctance to talk about caring is affecting millions of unpaid carers across the UK, meaning many aren’t getting the practical and emotional support they need.

“Most of us will look after someone, or be cared for, at some point in our lives so it’s in all of our interests to start the conversation and speak more openly about caring.

“This year we celebrate the 25th anniversary of Carers Week and we want to see more people involved than ever before. It’s a golden opportunity for all parts of the community – family and friends, employers, businesses, health and care services – to get the UK’s unpaid carers connected to help and support.”

“So many of us will care for our family, friends or a neighbour at some point in our lives but many of us don’t even recognise our caring role for what it is, which means we risk missing out on vital support. Opening up the conversation around getting carers connected this Carers Week 2019 is a great opportunity to help remedy this and build a support network.

“As a society we don’t value the incredible job carers do nearly enough. It’s so important that we work to make sure carers are connected to all parts of their community and raise awareness of their incredible contribution to ensure they feel comfortable to share their experiences and seek support.”

Carer Melanie, 58, who cares more than 60 hours a week for her younger brother Nick who has Huntington’s disease, spoke about challenges she faced finding information and support:

“When I started caring for my brother in 2016 it felt as if we’d both fallen through a black hole in space. As well as the frightening deterioration in his health, I was overwhelmed with the sheer bureaucracy involved in accessing support services, who to talk to and how long it took, all in my own time.

“Organisations don’t seem to realise how many hoops unpaid carers have to jump through again and again just to get simple things in motion. While the NHS have provided some great support there is little joined up practice between local authorities and social services, despite willingness from many of the staff.

“I’m indebted to my husband and a few close friends who have helped to pick up some of the strain. In Sheffield we’re also fortunate to have a multi-disciplinary service that provides support for people with long-term neurological conditions.

“Disability is fairly public these days but there’s still a lack of comprehension about what it means to be disabled – or caring for an impaired person – mainly because so much of it is invisible to the outer world.”