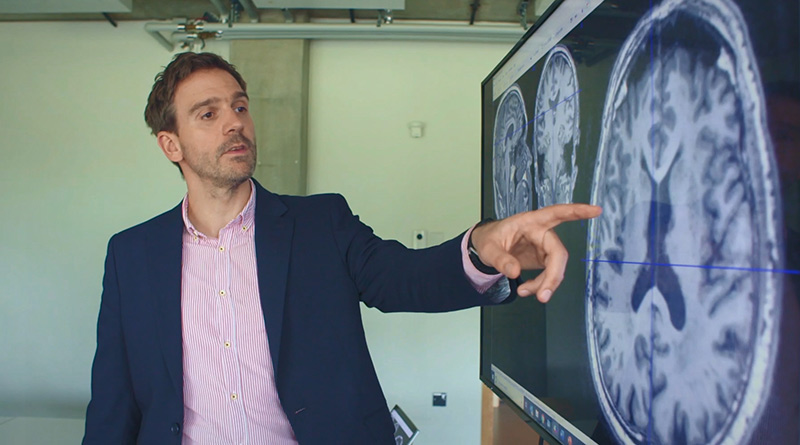 Norwich-based clinician and researcher, Prof Michael Hornberger, takes the spotlight in a hard-hitting new charity film, exploring the impact vascular dementia has on the brain.

The film is part of Alzheimer’s Research UK and Ricoh’s joint campaign, Dementia Uncovered, which highlights the many physical diseases that cause dementia, as well as the scientists striving to bring about new treatments.

The campaign is launched as the charity also reveals that nearly half (46%) of UK adults are unable to name a single type of dementia. While Alzheimer’s disease is well recognised, other causes of dementia receive less public attention. The survey carried out by YouGov survey shows that when prompted, most UK adults (92%) had heard of Alzheimer’s disease, under one in four (24%) could name vascular dementia – the second most common type of dementia.

Prof Michael Hornberger from the University of East Anglia takes the leading role in a film, directed by Gemma Brady (24 Hours in A&E), discussing the impact of vascular dementia and the hope that lies in research.

Vascular dementia occurs when blood vessels in the brain are damaged, reducing blood flow to brain cells and affecting how they work. Prof Hornberger’s research focusses on tracking the progression of disease, improving diagnosis, and managing symptoms.

His work at the University of East Anglia is in close collaboration with nurses, other research clinicians and specialised healthcare professionals to approach dementia from a multi-disciplinary angle. This collaborative approach is critical in developing prevention strategies and treatments for vascular dementia, which causes a fifth of dementia cases.

Prof Michael Hornberger from the University of East Anglia, said:

“It’s a privilege to be able to work with people living with dementia every day. Many people aren’t aware that changes in the brain’s blood supply can cause dementia and we know there are things we can do to improve our brain health.

“Research in Norwich is helping improve our basic understanding about dementia and giving hope that we can develop a treatment for those who need it.”

“These eye-opening survey results show that while many people recognise Alzheimer’s disease as a cause of dementia and 92% associate memory loss with the condition, far fewer can name other forms of dementia or the wide range of symptoms they bring. It’s important that people realise the condition is far more than just memory loss.

“We are delighted to be working with Ricoh on this important campaign once again. We’re incredibly grateful to the commitment and dedication of the researchers like Prof Hornberger whose work is so crucial. Dementia research is making progress and with support from the public and companies like Ricoh, we can make breakthroughs possible.”