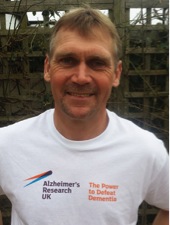 A fundraiser from Northampton will be heading to the most remote part of the planet on Sunday 5 April to raise funds for Alzheimer’s Research UK – the UK’s leading dementia research charity.

Chris Petrie, 47, will be tackling the North Pole Marathon – a 26.2 mile race starting at the international North Pole Camp called Barneo, at the North Pole. Dubbed the world’s coolest challenge, the financial consultant decided to raise funds for Alzheimer’s Research UK as members of his family, and an increasing number of his clients, have been affected by dementia. Chris is also taking part in the arctic challenge to raise funds for The National Autistic Society.

Chris will fly to Svalbard in the Arctic Ocean where he will meet the rest of the group taking part in the North Pole Marathon. Following a debrief and having adjusted to the below-freezing temperature, the group will then fly to the North Pole ready to take part in the Marathon, which begins on Thursday 9 April. The route consists of three-mile laps around the base camp which will test the runners’ physical strength and determination.

“I’ve run all my life as it’s something I enjoy and it’s a great way to keep fit. I’ve run the London Marathon twice but running on ice in temperatures of -25 degrees is a totally different discipline. I have been doing lots of cross country running in my training but I don’t think anything can prepare me for the freezing temperatures and potential blizzards at the North Pole. Knowing that I’m doing something positive by raising money for Alzheimer’s Research UK will spur me on when the going gets tough.

“Many of my clients have been affected by dementia and it’s a truly devastating condition. I’m certain that one day there will be a cure but for this to happen there needs to be a greater investment in research.”

“What an exciting challenge Chris is taking on for Alzheimer’s Research UK. Running a traditional marathon is gruelling enough but add in the below freezing temperatures and treacherous terrain and this is going to be the ultimate challenge for Chris. Every £20 he raises will fund another hour of vital dementia research, bringing us closer to finding ways to diagnose, prevent, treat and cure the many forms of dementia.

“There are over 850,000 people across the UK living with Alzheimer’s disease and related dementias today, including over 8,000 people in Northamptonshire. Despite this, dementia research is still significantly underfunded compared to other serious diseases. We rely on public donations to fund our world-class research and it’s thanks to the commitment of people like Chris that we’re able to continue our crucial work.”

To sponsor Chris visit www.justgiving.com/teams/chris-petrie. For further information about Alzheimer’s Research UK, or to find out more about fundraising for the charity, call 0300 111 5555 or visit www.alzheimersresearchuk.org.