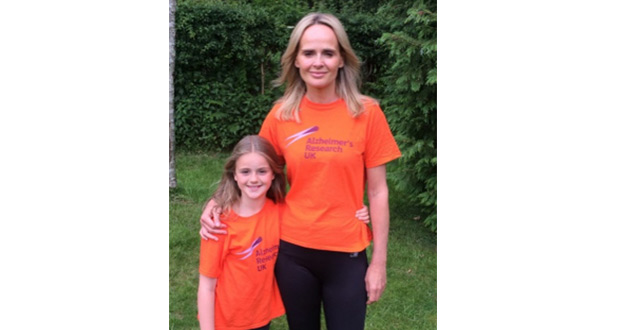 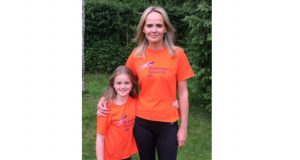 At just nine years-old Zara Bishop, and her mum Rachel Bishop, have signed up to Running Down Dementia, Alzheimer’s Research UK’s first virtual running event, in honour of Rachel’s mum Jane Allison, who is living with Alzheimer’s disease.

Running Down Dementia encourages participants to run 100km and raise £100 over the summer and record the runs through their personalised web page.

Despite being in primary school, Zara is taking on the full 100km while Rachel’s on a mission to complete an enormous 1,000km.

They have already smashed the £100 fundraising target, having raised over £940. They are now looking to raise £1,000 for vital dementia research.

Rachel was left devastated when 69-year-old Jane was diagnosed with Alzheimer’s two years ago. She is currently being looked after by Rachel’s dad Richard Allison at the couple’s home in Lindfield.

Rachel, who is a mother-of-two and works as a primary school teacher in Crawley, said:

“Zara’s doing really well and is already close to 100km. For the last year she’s got really hooked on running, she loves it and runs with me on weekends.

“I go over to Zara’s school at lunchtime and lead a running club for around 16 children, including Zara, aged between eight and 11. We run in the woods and by the lakes, and they love it because I tell them how much they’ve helped me run towards my goal and they feel like they’re doing Running Down Dementia with me.”

The 44-year-old explained how running has helped her cope with her mum’s condition. She said:

“Mum was diagnosed two years ago but she started showing symptoms around four years ago. She’s become unrecognisable. She doesn’t speak or understand very much. Dementia takes away the person and leaves a stranger, I find it very difficult. Zara is so good with her, she says ‘come on Nanny’ and encourages her to join in with things.

“Mum is fit and active, and always has been, but she has lost all her skills. She can’t make herself food, and needs to be told to do things like brush her teeth. Even making a cup of tea she’d need to be told exactly what to do and someone would have to be there. My dad does everything for her.

“She was very dynamic, an amazing seamstress and she ran two hotels in Maidenhead and Wales. To go from someone who ran the show to someone who can’t look after herself is so sad. At first she’d cry and ask why it was happening to her, but now that she’s unaware of what’s going on she is happy, which is a blessing. It’s harder on those of us caring for her.

“Dementia and running are two massive things in my life. When I saw the campaign I just knew I had to take part. Running has saved me, it’s helped me cope and it’s so central to my life. For Zara, who has seen her nanny crying and all the negative parts of the disease, she’s finally able to do something to really help and do something she’s proud of. Whenever she gets any sponsorship through she’s just so thrilled every time.”

“I love running, especially with Mummy and my friends. I’m really pleased that so many people have sponsored me so I can do something to help Nanny.”

To donate to Rachel and Zara’s fundraising page go to https://runningdowndementia2017.everydayhero.com/uk/rachel-3

“We can’t thank Rachel and Zara enough for their fantastic fundraising efforts and we’re absolutely thrilled to see the phenomenal amount they’ve already raised together.

“There are more than 850,000 people in the UK living with dementia. Rachel and Zara, and all those taking part in Running Down Dementia this summer, are helping fight back against the diseases which cause this cruel condition. Alzheimer’s Research UK is on a mission to end the fear, harm and heartbreak of dementia, and we couldn’t do it without our supporters.”

To sign up to Running Down Dementia, go to www.runningdowndementia.org