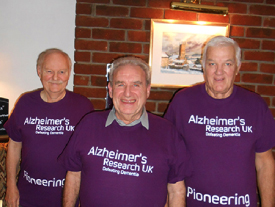 People in the Huddersfield area are being urged to join a new group set up to raise funds for the UK’s leading dementia research charity. The Alzheimer’s Research UK Huddersfield Group, which was formed by three fundraisers who have seen friends and family affected by dementia, is the first of its kind in Yorkshire and the trio are seeking members from the local area to help them in their mission.

The group was formed after Norman Mellor, from Meltham, joined forces with friends Bryan Johnson, from Honley, and Alan Swift, who lives in Highburton. The three are already laying plans for their first fundraising events, including a planned concert in Armitage Bridge in May featuring a performance from Norman – who is a member of Honley Male Voice Choir – and friends.

Norman, the group’s chair, has previously raised thousands for charity and was the driving force behind setting up the new group. He explained:

“I felt I needed to find a new challenge, and this cause was important to me because I’ve seen friends and family members affected by dementia. Whereas research has made a real difference to diseases like cancer, dementia is on the rise and at the moment there’s no cure. Dementia is a terrible condition, not just for the people affected but for their families too, and we want to do what we can to help the research experts.

“Word is spreading about our group but we’d like more people to get involved. We cover the whole of the Huddersfield area so anyone is welcome – we really need people with lots of ideas for raising money. The more members we have, the more we’ll be able to raise together for research.”

“We’re delighted to welcome the Huddersfield Group on board and look forward to seeing their exciting fundraising plans. Every £20 raised is enough to support an hour of pioneering research, bringing new treatments, improved diagnosis and preventions ever closer.

“Over 25,000 people are living with dementia in West Yorkshire alone, and we urgently need treatments that could make a difference to those people’s lives. We rely on our supporters to be able to fund our research, and it’s thanks to the commitment of people like Norman, Alan and Bryan that we’re able to continue our vital work.”