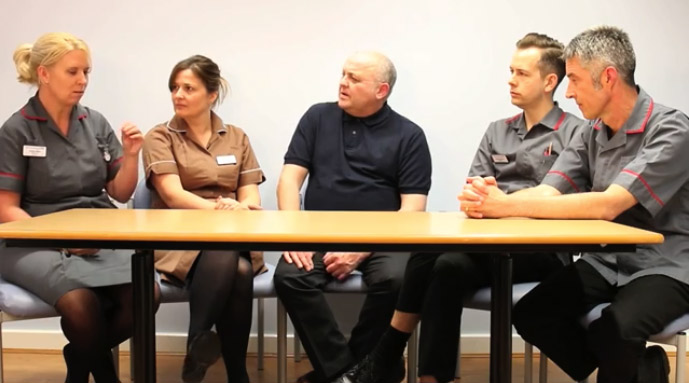 The event at Broomfield Hospital brought together staff from hospitals all over Essex to watch the innovative new training film that it is hoped will become a staple of staff inductions throughout the county.

In addition to the screening, attendees got to listen to Healthwatch Essex’s Chief Executive, Dr Tom Nutt, and nurses from Broomfield Hospital as they talked through the process of making the film with Tommy Whitelaw from Dementia Carer Voices.

“We worked with Tommy last year, bringing his inspiring story of caring for his mother, Joan, to people throughout Essex. That led to the film that we worked with Broomfield to create and that they have now made part of their induction process,” explained Dr Nutt.

“By showing the film to all staff as soon as they join, greater levels of understanding of dementia can be shared and a more personal approach to care can be engendered, so that each and every time a member of staff comes into contact with someone they treat them like the individual they are.”

The film features clips from Tommy’s powerful talk, discussions and testimonies from staff, and illustrates how listening to the patient’s story can inspire innovations in person-centred care.  The aim of the premiere was to screen the film to staff from other hospitals around Essex and to encourage them to join Broomfield in making it an integral part of the induction process for all new staff.

Shevaun Mullender, Critical Care Matron at Broomfield Hospital, said, “Tommy’s core message is one of kindness. How you could be that one person, on that one day, that could really make a difference. He has taught us all to reengage with the reason we came into healthcare in the first place.”

Tommy said “For me caring is about people and relationships. I feel so honoured to be part of this film and inspired by all at Healthwatch Essex and Broomfield Hospital since we first met.

“I feel so lucky to have had the time to get to know so many people involved in today’s film launch and the wider work that they do. I am both inspired and proud of what they do to make a difference, not just today with this film, but every day.”

The film is now available to watch via the Healthwatch Essex website at: www.healthwatchessex.org.uk/what-we-do/our-films/