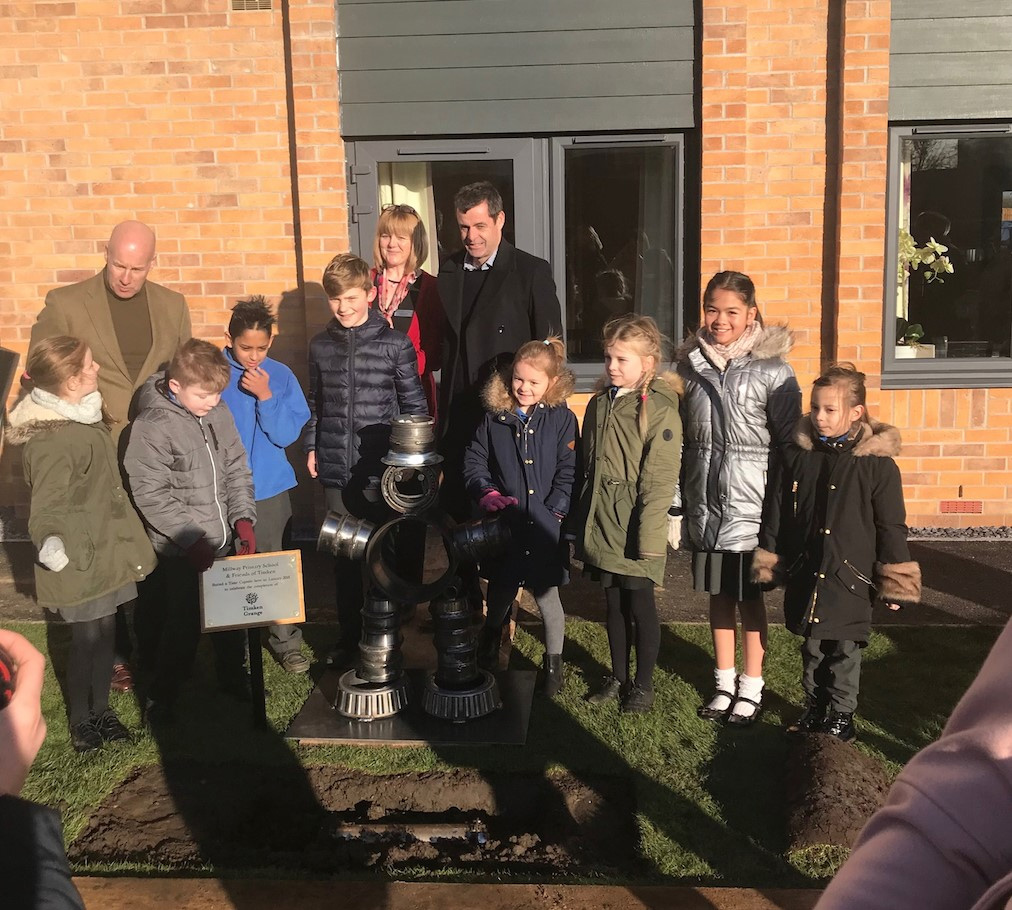 Brand new Duston care home, Timken Grange, recently enlisted the help of local school, Millway Primary, and Friends of Timken to bury a time capsule on their site. Pupils of the school have been busy collecting artefacts, including medals, bookmarks and a school time-table for the time capsule which will create a lasting tribute to the renowned British Timken factory which previously stood on the site on Timken Way South.

The sun shone brightly as a number of key associates and Friends of Timken gathered to provide fascinating items of memorabilia including Timken rosettes, pens and pencils and copies of images of the factory in its heyday including VE Day and the annual show (copies kindly donated by Northamptonshire Archive & Heritage Service) and a two page precis on the History of British Timken. To signify the link between past and present, the Timken Rail Company, which operates near to the home in Duston, kindly donated a large, handmade sculpture based on the patented tapered roller bearings which were the bedrock of British Timken.

Mr Baillion, Year 4 teacher of Millway Primary School, attended the ceremony along with 8 pupils. Also in attendance were founding partners of Timken Grange, Chris Babington and Andrew Long, management and staff of the home, along with Andy North (Northamptonshire Archive & Heritage Service) and Friends of Timken member Ann Martin (wife of Timken life-long employee). The group enjoyed cupcakes and hot chocolate after the short ceremony when the artefacts were placed in the stainless steel time capsule and buried at the front of the site. The sculpture, affectionately named as ‘Tim’, was placed to mark the location of the time capsule with a plaque commemorating the event.

Rachel Cadd, Home Manager at Timken Grange whose own father worked at Timken said: “We are extremely proud of the strong heritage of British Timken and are excited to be opening our home on this historic site. I’ve been overwhelmed by everyone’s genuine effort to contribute to the time capsule and I am sure that it will be a great talking point for our residents and local community for years to come.”

Mr Baillon said, “Our pupils have thoroughly enjoyed researching and getting together items for the time capsule – many have family members who worked at British Timken so it has been an extremely interesting project. We all had a great time at the ceremony and the children were very taken with ‘Tim’! We are looking forward to the home being open so we can come back and meet the new residents.”