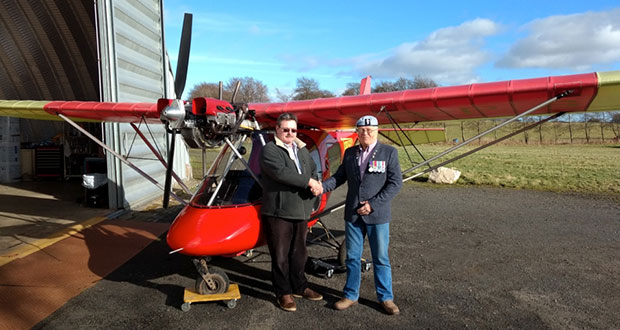 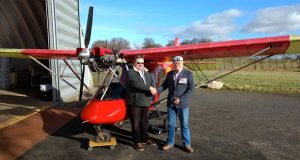 Almost 60 years after first getting into a cockpit, a Fife man has his pilot’s licence in his sights as he studies for the first round of tests.

It’s up, up and away for Roddy Kyle, a tenant at Bield’s Abercrombie Court in St Monans, as an upcoming hip replacement has failed to take the wind out of his enthusiasm for aviation.

The 75 year old, who has worked across the globe serving his country, has taken on the challenge of achieving his pilot license decades after his maiden voyage.

In 1958, Roddy got his first taste of life in the skies at the age of 16, as he flew gliders whilst on leave from training to be a mechanic in South Wales, controlling the plane from an open cockpit.

Roddy said: “As soon as I got behind the controls of the glider I knew this was something I could do again and again.

“My initial deployment to Germany in early 1961 was by Troopship but Trooping flights to Germany started in 1961. It wasn’t the most pleasurable experience so it’s fair to say I wasn’t a fan of passenger flying.

“Now in the cockpit with my hands on the controls, it’s been an amazing experience and I’m even looking at the possibility of buying into something to fly more regularly.”

Now flying from Balado in Fife, Roddy served with the Army all over the world including, Germany, Borneo (Army Air Corps), and Australia at Maralinga – the UK’s nuclear test site.

Roddy added: “When you’re in the air it’s really quite simple and great fun– it’s the landing that is a bit trickier!

“I’ve spent a wee bit of time on YouTube looking at tutorial videos but it’s not something you can master just from watching, I’ve been lucky enough to receive some fantastic instruction.”

His honours include: GSM Borneo, Pingat Jasa (Malaysia Govt) and serving in Germany and Belgium during Cold War as well as service in Nuclear Areas.

After the Army service he spent 35 years in the Oil and Gas industries working in the Caspian area, Africa, Middle East, India, and the Far East.

Now Roddy lives in Fife, but still enjoys a little adrenaline rush from time to time. Prior to his decision to gain his license, you could say Roddy’s hobbies have always had a dare devil streak, as he jokes that he enjoys “a bit of ‘off-piste’ hill walking”.

Roddy is also a member of the 10 strong volunteer Abercrombie St Monans Community Group, who raise funds and have donated to a number of charities including Erskine Veterans Charity, CHAS and the local Primary School

Kathy Crombie, Communications & Marketing Manager at Bield said “We are so proud of Roddy working so hard and finally having a go at attaining his pilot license. To see him following this dream at 75 is a true inspiration to all of us and we wish him every success in his steps on the road to getting his license.”