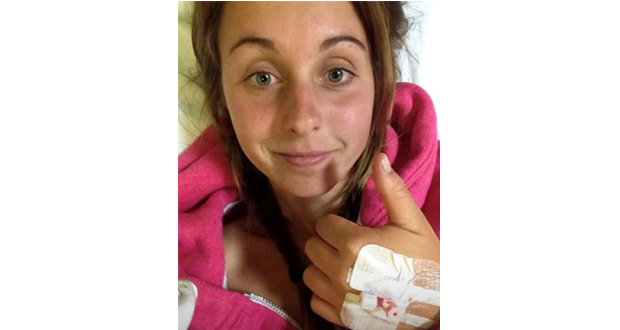 New figures published today by the Stroke Association reveal that almost half (43%) of stroke survivors across the UK, aged under 65, are faced with financial hardship after their stroke. The charity’s findings reveal that more than 125,000 stroke survivors have experienced a loss of income, faced discrimination at work, and in some cases, have been forced to sell their home to pay for medical expenses.

The Stroke Association’s Lived Experience report is the UK’s largest ever survey of people affected by stroke(i) with over 11,000 responses. The second chapter (of four), The wider impact of stroke, shows how the impact of the condition affects people’s working life, relationships and finances.

There are currently over 1.2 million stroke survivors in the UK, with a quarter of strokes happening to people of working age. The findings show the price tag that can come with a stroke, revealing that across the UK;

Vicki Hewlett, 24, from Essex, knows all too well the impact stroke can have on your working life and finances. After having her stroke in July 2015, when she was just 20 years old, Vicki found that her employers just didn’t appreciate her condition after returning to work as a horse riding instructor – a job she loved.

After coming home from work that July, Vicki found that she couldn’t raise her left arm, which she initially dismissed. However, after shouting her partner Chris, they suddenly discovered Vicki was unable to stand, smile or even speak.

MRI and CT scans at the hospital soon revealed Vicki had had a stroke but it would be six months before they discovered that the stroke had been caused by a hole in her heart. Vicki returned to work within a few months of her stroke but her situation would never be the same.

Vicki said: “After my stroke I felt like I had been hit by a bus. I have never felt so weak and delicate. When I came back to work, I never really felt like they understood the severity of my situation. I couldn’t do certain physical tasks anymore but I tried so hard to carry on as normal”

“They put it down to laziness that I couldn’t do certain things. One day I was told off for sitting down, which I had to do due to fatigue. I was told I didn’t look enthusiastic, I honestly felt like a liability to them and I was in tears every night”

Vicki’s employers continued to offer no support and she eventually lost her job. Vicki was never given much warning and even had to work her notice period as she couldn’t afford to be out of work

Vicki said: “One day I was called into a room and told it wasn’t working anymore. I was so worried about myself and my partner financially. In the end we were lucky that our families helped us out with groceries and a bit of money but the whole thing was scary. I remember being so angry at how my employer had treated me”

“Looking back now, it was a blessing in disguise. I’ve been in my new job for three years now, working in operations for a shipping company and I love it. I try to be a really positive person, so I do look back now and try to understand why I was let go but it’s never easy.”

Juliet Bouverie, Chief Executive of the Stroke Association, said: “Life changes instantly after a stroke, and the condition can have a huge cost, not only to people’s finances, but also to their health, independence and relationships. But not enough people realise the wider impacts that stroke can bring. Overnight, a partner becomes a carer. A breadwinner becomes jobless.

“These latest figures show that many stroke survivors are facing a life on the edge of poverty; many have had to give up work, and in some cases, face discrimination from their employers. This comes at a time when financial worries should be the last thing on their minds.”

The Lived Experience of Stroke report seeks to expose the realities of living with stroke. The charity wants everyone affected by stroke to have access to the support that they need, when they need it. The latest findings also show that:

Juliet continues: “Recovery is tough, but with the right support and plenty of courage and determination, the brain can adapt. Time and again we’ve seen thousands of people adapt to a new life after stroke; and we’ve helped them to adjust to a new normal. However, it is extremely worrying that not enough stroke survivors are receiving the support they need to either remain in work or access vital benefits. I’d like to see more people contacting our Helpline to help them through this difficult process.”

The Stroke Association spoke to stroke survivors, who offered advice for anyone who has found their work or finances impacted by their stroke. They advised:

Before stroke happens, consider income protection insurance and critical illness cover. For those who have dependents, such as a partner or children, you might also consider life insurance.

Don’t be afraid to seek help – whether you are a stroke survivor or you know someone who has had a stroke.

Angela Matthews, Head of Policy & Advice at the Business Disability Forum, said: “Soon after a stroke, a survivor has to navigate how different their body feels, the changed pace at which their body needs to work, and learn to adjust to doing things in new ways. All of this often happens in the background while needing to return to work so that personal finances are affected as little as possible. Stroke survivors might not be able to return to the same job they did before, but they can sometimes return to some type of work, albeit different to what they used to do.

“The worrying 51 per cent who have given up work following a stroke means employers are losing valuable, experienced talent. There is also the wider policy concern that the disability employment gap is being increased, when stroke survivors are not being supported back to work by both the healthcare and workplace settings working together.”