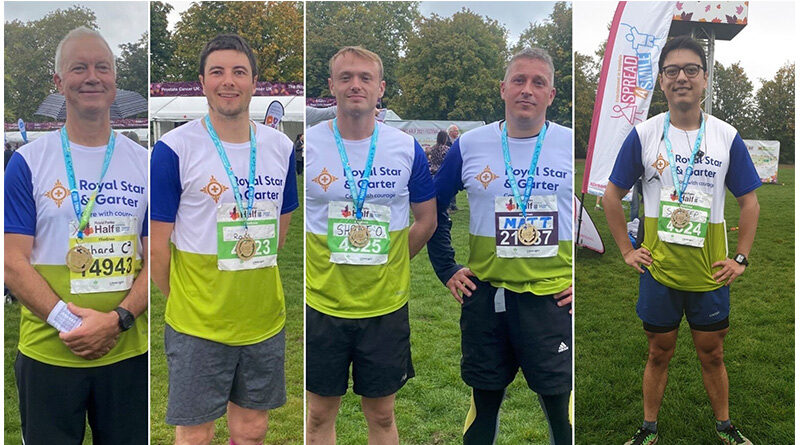 Serving members of the military and an Army veteran have raised money for Royal Star & Garter by taking part in the Royal Parks Half Marathon.

Squadron Leader Richard Cheseldene-Culley and Senior Aircraftman Sudeep Maden, based at RAF High Wycombe, and Lieutenant Shane Landymore and Warrant Officer Class 2 (Staff Sergeant Major) Matthew Baker, who are with the Royal Corps of Signals in Stafford, took part in the run through central London on Sunday 10 October.

They were joined by Ross Mewett-Mckinlay, who was in the Army for 12 years and served in the Royal Engineers, where he reached the rank of Lance Corporal. He now works at the Ministry of Justice.

In total, they have so far raised £2,968 for Royal Star & Garter, a charity which provides loving, compassionate care to veterans and their partners living with disability or dementia, at Homes in Solihull, Surbiton and High Wycombe. This figure is expected to rise as more donations come in.

Sqn Ldr Cheseldene-Culley chose to raise money for the charity for very personal reasons. His father James Cheseldene-Culley, an Army veteran who served in the Korean War and was later a Reservist in the Special Forces with the SAS, was cared for at the old Richmond Home before his death in 2009. The 57-year-old said: “I was with him at Royal Star & Garter the night before he died. The staff were always fantastic and it was a super place. When I came to RAF High Wycombe I was told Royal Star & Garter was one of the charities we support and that there was a Home nearby, so I jumped at the chance of helping in whatever way was required.”

Ross, 34, found out about Royal Star & Garter when looking for good causes to fundraise for. He said: “I knew it had to be a charity affiliated with supporting veterans of the Armed Forces. I discovered Royal Star & Garter and read about the important work they do. Considering I was in the Army for 12 years, I thought it a very worthy charity to be representing.”

Lt Landymore, 23, said: “We found out about the charity through our chain of command and thought it would be a great opportunity to raise money for a remarkable cause.”

Royal Star & Garter’s Senior Community Fundraiser, Lauren Baker, said: “It’s very special when the military family comes together like this to support the work we do with veterans.We’re grateful that Richard, Sudeep, Ross, Matthew and Shane chose to run for Royal Star & Garter.”

Royal Star & Garter is one of RAF High Wycombe’s official charities. Earlier this year, service personnel took part in a car wash fundraiser. They were given a helping hand and supported by residents from the High Wycombe Home, and raised £266.

Three runners raised more than £6,000 for the veterans’ charity when they took part in the London Marathon on 3 October.