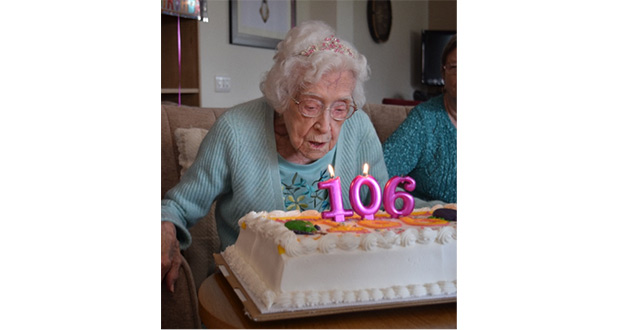 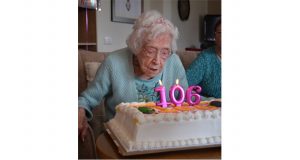 Monica Budge is MHA’s oldest retirement living resident when it comes to living independently with just a little support from care staff as she marked her 106th birthday.

Monica lives at Assisi Place, a retirement living scheme in Hunslet, Leeds, which enables Monica and her fellow residents to live independently in their own home but also be secure in the knowledge that help and support packages are available if they need them.

Assisi Place is run by older person’s charity MHA, which provides care, accommodation and community-based support for more than 10,800 people across England, Scotland and Wales.

Family members, residents and staff gathered to wish Monica a ‘happy birthday’ as well as Director of Chaplaincy and Spirituality, Chris Swift, calling in to present Monica with flowers on behalf of MHA. Monica said at the end of the celebrations: “Today has been lovely – I have been thoroughly spoilt.”

Monica was born in 1913, before the start of the First World War, in Burnley, Lancashire, and has seen many changes in her lifetime.

A keen dancer, Monica used to go dancing four times a week and only stopped at the age of 83. She met her husband, Edmund, through her love of dancing. He was a saxophonist in a dance band and they met after Monica had to go back to a venue as she’s forgotten her handbag and, to her surprise, he asked if he could walk her home.

They married in 1936 and had a daughter. Monica now has two grandchildren and three great-grandchildren. Sadly Edmund died when he was 54 after 29 years of marriage.

Monica has always worked throughout her life, starting as a weaver in the cotton mills in Lancashire before going to work in hospitals before war intervened. During the war, which Monica described as a ‘terrible time’ due to all the blackouts, Edmund served in the Navy where Monica says she was ‘really worried for him’.

After war work, she returned to the mills again, going on to assembling electric Belling fires at their factory in Burnley until she retired.

Monica moved to Assisi Place in 2011 and was one of the first residents at the scheme.

Monica’s advice to young people today is to ‘be decent’ in all they do and that her secret to a long life was ‘to work hard as I’ve done all my life’.