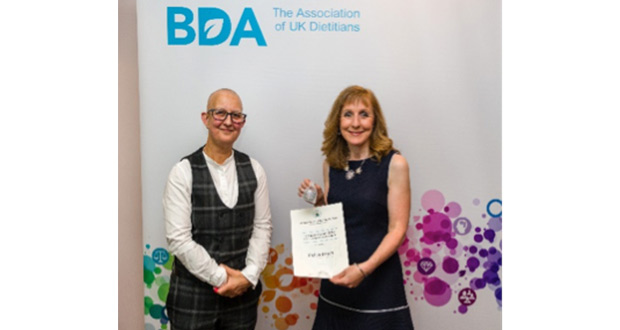 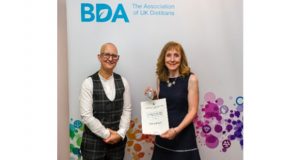 Medirest dietitian, Helen Ream, has been awarded the Ibex Honour from the British Dietetic Association (BDA), for her contribution to the second edition of its ‘Nutrition and Hydration’ Digest. The event was held on 19th June in Birmingham, to celebrate the achievements of some of the UK’s most accomplished food and nutrition professionals.

Five years after the BDA launched its successful Digest, Helen led the update and review of the comprehensive document, which replaces the original as one of the five key papers forming national hospital food standards in England.

Launched in 2017, key changes to the Digest included updated recommendations such as information about the latest Hospital Food Standards and the introduction of a new chapter about Health and Wellbeing for staff and visitors in the NHS.

Sian O’Shea, Chairman of the BDA commented: “Helen leading on the updates to the Digest was a hugely important piece of work that sets the standards for, and informs the industry. We are very grateful to her for her valuable contribution and for imparting her knowledge and expertise in this area.”

Helen Ream, Medirest Dietitian, commented: “It’s been an honour to lead such an important piece of work. To receive this award is testament to the efforts the working group put in. The fact that I was nominated by my profession’s peers makes this award very special.”

Helen has been a Dietitian for 25 years and until 2014, had roles within the NHS. She joined Medirest, Compass Group UK & Ireland’s healthcare division, in 2015 and during this time, she has worked with its Care Home teams to support and enhance nutritional care for residents in this setting.

In addition to receiving this prestigious award, Helen and fellow Medirest Dietitians, Maxine Cartz and Lisa Baker, were all named on the BDA’s Roll of Honour. The list recognises and rewards its members who have contributed significantly to a defined piece of work in the past 12 months.