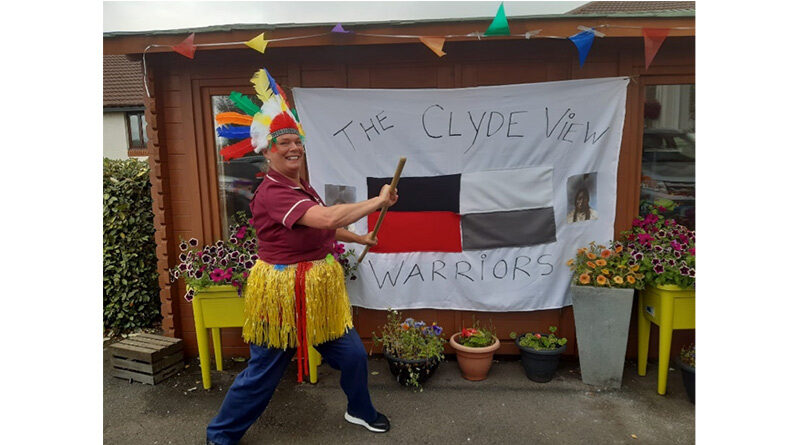 The winners were announced virtually on 10 August by Jody Marshall, Meallmore’s Group Hospitality Manager and Carol-Anne Foote, Meallmore’s Commissioning and Business Development Manager as a week of Olympic-themed activities came to a close.

Open to all 26 Meallmore care homes across Scotland, teams of both residents and staff were asked to create a team flag and a national anthem, with the brilliant efforts setting the tone for the games. Flags were waved and anthems sung at the start of each of the four rounds of activities.

28 teams representing Meallmore’s 26 care homes from across the country battled it out in the rounds ‘synchronized hoovering’; ‘come fly with me’; ‘bouncing basketball’ and the ‘laundry triathlon’.

There were two overall Meallmore Olympics winners; one for Meallmore’s Specialist Services homes and one for its Elderly Care Homes. The team ‘Daviot the Brave’ from The Drumboe Unit at Daviot Care Home in Inverness won for the Specialist Services teams, while the ‘Clydeview Warriors’ from Belleaire House in Greenock won for the Elderly Care teams.

Jody Marshall who organised the activities said: “While it’s been a summer of sport this year, the highlight of our 2021 has undoubtedly been the second annual Meallmore Olympics. It’s proved to be quite the hit with everyone, with hundreds of people getting involved in all of our homes across the country. Our residents and staff have really demonstrated their talents – and their competitiveness!

“While we’re all individual units caring for people across Scotland, we’re all one big team and family. The passing of our Olympic Flame in our opening ceremony was an emotional one for us this year, as it represented our connection, despite us being apart. I’d like to say a huge congratulations to all Meallmore competitors on their fantastic efforts during the games. You’ve all done your homes incredibly proud.”