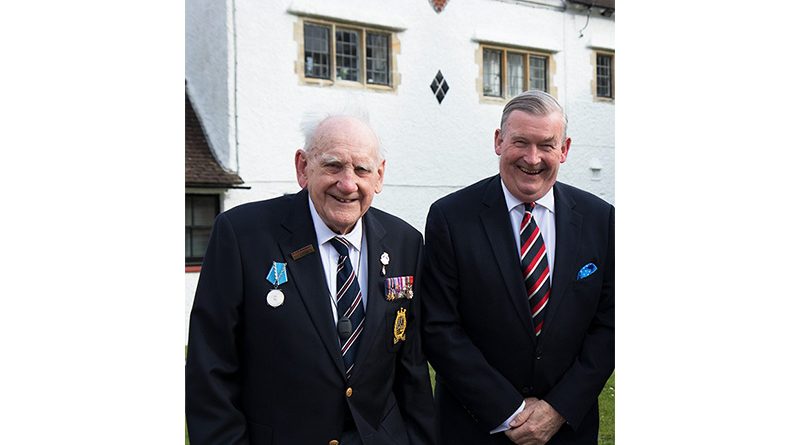 This year, Seafarers Awareness Week highlights the immense challenges faced by merchant seafarers and their families during the COVID-19 pandemic and The Royal Alfred Seafarers’ Society is paying tribute to the ‘unsung heroes’ of the crisis – the key workers that have kept the UK afloat during these unprecedented times.

The Society, which was established in 1865, delivers expert care to former seafarers and their dependants – including those living with dementia – from a variety of maritime backgrounds including; the Merchant Navy, Royal Navy, Royal Marines, and Wrens (Women’s Royal Naval Service), all of whom have fascinating tales to tell from their days at sea.

Championing the Society’s seafaring residents, CEO, Commander Brian Boxall-Hunt, said: “This Seafarers Awareness Week I am proud to celebrate all of our former seafarers here at the Society and of the contributions they have all made to the maritime industry during their time in service, including many during WWII.

“While we are looking back on the contribution made by our residents it is also important to recognise the work of the UK’s current seafarers who, as key workers, have kept our country afloat during the pandemic, and kept our vital trade and supplies operating as usual during these peculiar and challenging times. Seafarers around the world often sacrifice so much to ensure we can continue our lives as safely and with as little disruption as possible and we thank our country’s unsung heroes for their dedication.”

Tales from the Society’s former Seafarers:

Lieutenant Commander Geoffrey Haskins, one of the home’s D-Day veterans, said: “I joined the Royal Navy in 1943 as a Midshipman and, in 1944, I was called up for the D-Day landings as my first assignment at just 17 years old.

“D-Day was such a top-secret mission, that I nearly got into trouble with my Captain when I recognised one of the locations as we were sailing up to the beach – ‘That’s Arromanches!’ I called out, which raised some eyebrows on the bridge. ‘How did you know that?’ and I had to explain to my superiors that I recognised the beach as I had visited with my family previously on our holiday.

“I spent 25 years in naval uniform and I’m very proud of my rich maritime history. One of the great things about The Royal Alfred is we all come from such a variation of seafaring backgrounds – we are a real community and it’s special we all have the sea in common.”

John Conacher, also a tenant at the Royal Alfred, was a Deck Officer in the Royal Navy and Master Mariner. He said: “My seafaring career goes back to when I was a teenager. I attended King Edward VII Nautical College, prior to joining the Merchant Navy at the age of 17. I was a deck officer in the international shipping service for 20 years, then changed roles to become a land-based marine for the next two decades. My time at sea took me all over the world and I was lucky enough to visit some exciting places, many of which were not yet visited by people outside of the Navy.

“My wife was firstly a resident here at Belvedere House in the dementia wing. The care she received during her stay was excellent and I decided to become a tenant so I could be near her and spend more time with her. Many firm bonds have been established since I arrived here, and it has been a pleasure to renew friendships with likeminded people of a similar background.”