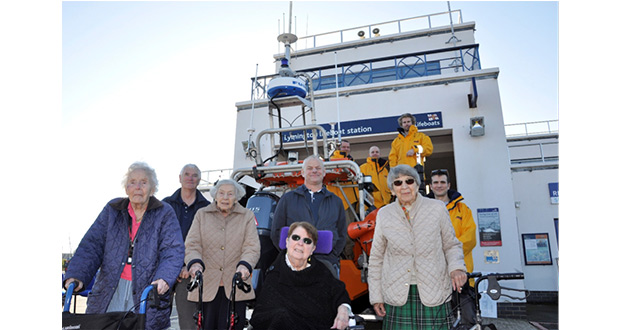 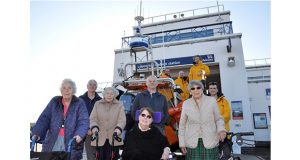 Saving lives at sea was the theme of the day as RNLI fundraisers from a Hampshire care home visited their local lifeboat station.

Four residents of Colten Care’s Belmore Lodge in Lymington took a minibus trip across town to meet some of the 21 volunteers whose vital work they support.

The hosts explained how the Lymington crew has responded to more than 110 callouts in the past two years, with an official ‘pager alert to launch’ target of just six minutes.

Recent emergencies in the Solent have included a search for a missing person in Freshwater Bay off the Isle of Wight and a fire on board a ferry.

After inspecting the station’s inshore lifeboat, named David Bradley in honour of a previous donor, the visitors presented a cheque for £207.63.

It follows a series of fundraising tea parties and other events at Belmore Lodge in which residents have made and sold crafts, gift items and decorative chocolates and biscuits.

Resident Janette Banks, who was born on the Isle of Wight, said: “The RNLI is a very important organisation that relies totally on donations. We decided we wanted to support it because all of us have chosen to settle here in Lymington which has such a strong sailing community.”

Lifeboat Station Operations Manager Nick Hayward, who has been involved with the RNLI for 38 years, 31 of them as a crew member, said the Belmore Lodge donation would go towards general running costs such as fuel and uniforms.

He said: “We rely completely on the kindness of supporters such as the wonderful residents at Belmore Lodge. Without voluntary donations, we simply wouldn’t have any funding. Every penny helps.”