New analysis by IPPR shows that the UK has missed 10 years of opportunities to create a flourishing life sciences industry, meaning a lost decade for an industry critical to the health and wealth of the nation.

IPPR has compared the UK’s performance at the beginning and end of the decade on life science – the medicines and health science industry often hailed as a national success story. This includes new analysis on the UK’s ability to attract global research spend to this country, and on supporting a strong manufacturing industry. Disappointingly, despite consistent government promises and commitments, performance has stagnated, the research found.

The report suggests that the government has been slow in implementing policies, such as those in the Life Sciences Industrial Strategy, that could have boosted the sector. At the same time, public investment in research and development has not risen fast enough, compared to expenditure in other advanced economies.

Combined with the looming threat of Brexit, this has created an urgent need for ambitious action to support a life science industry critical to 482,000 jobs and which provides £30.4 billion/year to the UK economy. The alternative is further decline in both the health and wealth of our nation, warns IPPR.

Urgent action, IPPR argues today, should include making the NHS an active partner in health innovation, rapidly implementing existing commitments from the Life Sciences Industrial Strategy and taking measures to reduce the impact of Brexit on this sector.

In its new report, A Lost Decade, IPPR proposes four tests for the UK government to ensure the nation’s life science industry is safeguarded from the most damaging impacts of Brexit:

The UK’s lost decade in the life sciences 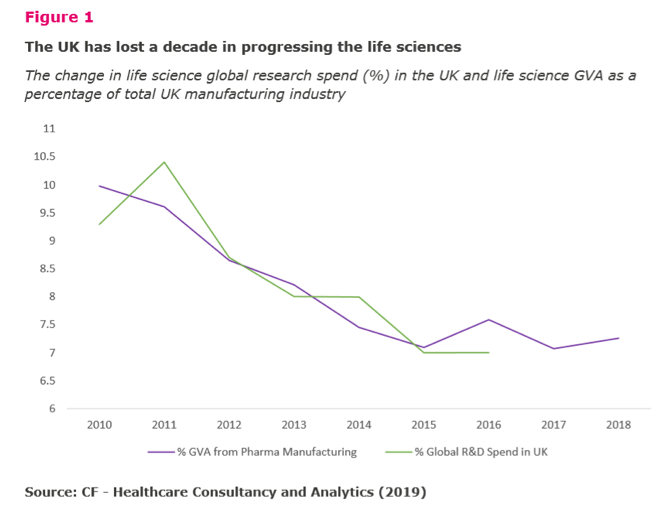 Chris Thomas, lead author of the report and an IPPR Research Fellow, said:

“As we stand on the precipice of a no-deal Brexit, it is alarming to see government failing to capitalise on our long-standing economic strengths like the life sciences.

“This research shows that one of our most important industries has been allowed to fall behind compared to our global competitors, and the rest of UK manufacturing.

“For all the rhetoric, governments have failed to implement policies to support this critical sector. If we hope to maintain our levels of health and wealth into the next decade, we must take immediate steps to mitigate Brexit, invest in research and implement existing commitments. There is a clear onus on government to take decisive action – now.”