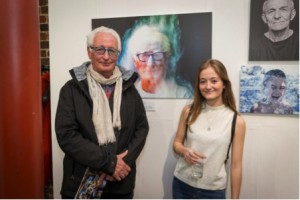 Seventeen year old Stella Wharmby from Francis Holland School, Sloane Square, London has been crowned a winner of the ESRC’s 2015 photographic competition ‘Changing World’. Stella received her £100 prize at a special awards ceremony last night (10th March) at the Menier Gallery in London. Her winning photograph will be displayed alongside a selection of the best entries at an exhibition in the Menier from the 10-14th of March.

This year as part of its 50th anniversary celebrations, the ESRC asked children aged 14 to 18 to think about how the world has changed over the last 50 years, and imagine how it may continue to change in the future. The challenge was to capture an essence of this change in a single photograph. The quality of the entries was outstanding, with over 1,600 entries from 270 schools.

Stella won a ‘Judge’s Choice’ award for her image ‘Disappearing,’ which explores how it feels to be around somebody suffering from dementia.

Stella says: “I wanted to create a photograph that depicts how it can feel to be around somebody suffering from the disease dementia. This is because my Grandma has dementia and often forgets events in her past, and events in the present, so is becoming a very different person to how she used to be. I poured powder over my model’s head so that their face would be somewhat hidden, representing the old parts of my Grandma that have disappeared because of the disease.”

Susie Watts, Deputy Head of Communications at ESRC, says “the photo appeals to me on so many levels. It is well shot, has great use of colour and speaks to me on a personal level as my Grandmother suffers from dementia.”

Mrs Lucy Elphinstone, Headmistress of Francis Holland School, Sloane Square, says: “Photography was only recently introduced as an A level at Francis Holland, Sloane Square, which makes Stella’s success even more remarkable.  We place great value in our curriculum on creativity, and photography, in particular, is a platform for self-expression, giving young people an opportunity to illustrate how they relate and respond to their challenging worlds.”

There were 6 winners across the various categories, and five winners of the Judges choice award. The overall winner of the competition, and winner of the environment category was 16 year old Rachel Coleman from Bishop Stopford School in Kettering, Northamptonshire with her photograph ‘Through the looking glass.’ Rachel named her picture after the Lewis Carroll novel Through the Looking-Glass, and What Alice Found There.

The winners were picked from over 1,600 images seen by judges Sophie Batterbury, Head of Pictures at the Independent; Ollie Smallwood, a freelance photographer, Professor Jane Elliott, Chief Executive of the ESRC; Jacky Clake, Head of Communications at the ESRC; and Susie Watts, Deputy Head of Communications at the ESRC. As well as deciding the winners for each of the six categories, each of the judges also picked their own personal favourite photographs.

“I was delighted by the very high quality of the photographs for this year’s competition. As the ESRC celebrates 50 years of helping us understand society, these photographs all offer astute observations about the world we live in today, and make us consider how things may change over the coming years.  To be able to capture in a still image the intricacies and complexities of today’s society and how it has changed is a remarkable gift – congratulations to all the winners.”