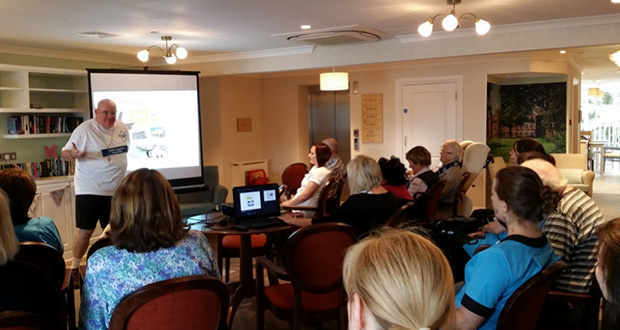 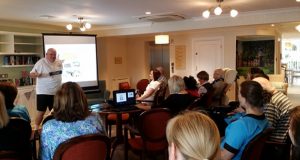 Terry Eccott was diagnosed with Vascular Dementia on 2nd April 2013.  Since then, Terry has been sharing his experiences through his presentation in hospitals and welcome days for the Alzheimer’s Society.

As part of its campaign to become a dementia resource for the local community, Fairmile Grange welcomed Terry to share his journey. Terry delivered two presentations for the residents, friends, family and staff of Fairmile Grange, as well as local healthcare professionals.

The Mayor of Christchurch, Counsellor Nick Geary, accompanied by the Mayoress, Mrs Gillian Geary, also visited Fairmile Grange to listen to Terry’s inspirational journey. Whilst the subject matter of his presentation was incredibly honest, he has embraced the disease and maintains a great sense of humour. His positivity was inspirational and he commented that his vocation to increase awareness of dementia is what continues to give him energy and keeps his brain functioning:

“It was an honour to be asked by Fairmile Grange to give my presentation (Living With Dementia). In recent years, the massive cutbacks that have been made in all departments concerning health have created crises points right across the country. In my home county of Hampshire there are 25,000 people diagnosed with dementia. These numbers are frightening as there are only 10 Dementia Support Workers and 10 Dementia Advisors working for the Alzheimer’s Society that cover the region. There are other charities in Hampshire working with similar numbers but still not enough to cover the 25,000 diagnosed with the condition.

Those figures are from just one county, therefore, it gives an idea of the magnitude of the situation across the UK. The number of those diagnosed with dementia is forever increasing and is a desperate situation that has to be dealt with. So I will continue to campaign for Dementia awareness and for more understanding of the disease for as long as my health permits.”

Terry has completed a documentary called Eclipse of the Mind, which follows Terry and his family from the beginning, to the end of his journey with the condition. It premiered in November 2014 in front of two hundred people and received a four minute standing ovation. Eclipse of the Mind achieved a top five placing in the National Dementia Care Awards in Brighton.

Terry has also made speeches about living with dementia in parliament, on the ITV News and at the International Dementia Conference in Plymouth earlier this year.