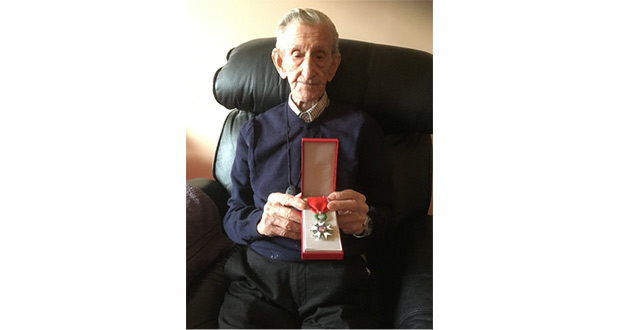 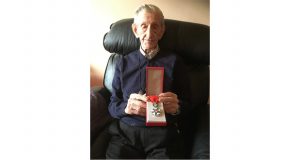 A 94-year-old Linlithgow pensioner has been awarded one of the highest military honours by the French government.

Thomas Gilmour, who served as a Commando during the Second World War, has been given the rank of Chevalier in “l’Ordre national de la Légion d’Honneur”, which translates as The National Order of the Legion of Honour, in recognition of the part he played in liberating France in 1944.

However Thomas, who has been a tenant at Bield’s Brae Court since 1993, has managed to keep news of his honour under wraps for more than six months.  Only recently has he shared the news about his achievement.

Rena Kirton-Vaughan, Manager at Brae Court, said: “I only found out recently about Mr Gilmour’s honour through his daughter. He is a very private person and has even kept the medal hidden away in a box.

“I don’t think many people at the development know of his achievement or the role that he played as a Commando during World War II.

“Last year he was invited down south to a ceremony to receive his medal, however he wasn’t well enough to attend. He was understandably disappointed that he could not receive his honour in person.

“I know that his family are extremely proud of him, as are all the team at Brae Court in Linlithgow.”

Established in 1802 by Napoleon Bonaparte, “l’Ordre national de la Légion d’Honneur” is the highest order of French merit.  The medal is usually awarded to French citizens, however foreign nationals who have served or dramatically contributed to France may also be honoured.

Speaking of his achievement, Thomas said: “It is truly an honour to receive the medal from the French government and to be given the rank of Chevalier.

“I was only a young man of about 20 years old during my time in France. It seems like such a long time ago but the memory of it all does stay with you.

“I dedicate this medal to all the men that bravely served in France, and those who sadly lost their lives.”