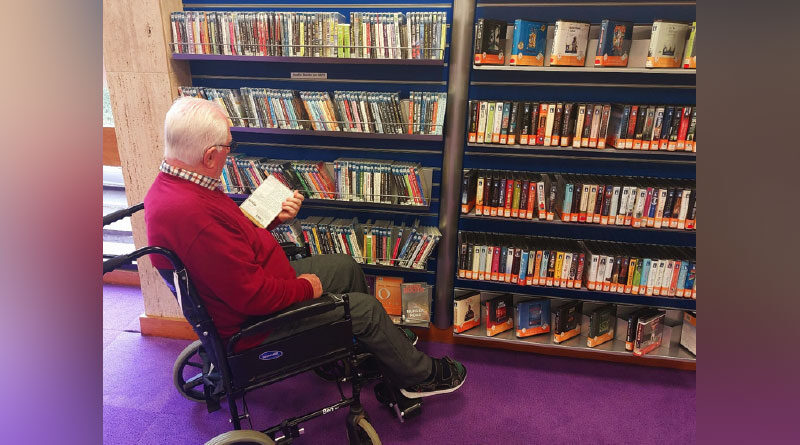 An Army veteran says his local library has allowed him to renew his love of literature, following a stroke.

Brian Bucknall was an avid reader before a serious stroke in 2019 left him struggling to physically hold a book and turn its pages.

But now the Royal Star & Garter resident, who served in the Army for 36 years, has joined The Core Library in Solihull, giving him access to hundreds of audio books.

He said: “Reading was my favourite pastime. I used to love getting stuck into a good book, but my stroke really affected by ability to do this. Since joining the library I’ve started listening to audio books and I can’t tell you how happy I am to have books back in my life.”

Royal Star & Garter provides loving, compassionate care to veterans and their partners living with disability or dementia, and has Homes in Solihull, Surbiton and High Wycombe.

Staff at the Solihull Home take Brian to the Homer Road library. He also makes use of its music collection and rents out CDs which he listens to in his room at Royal Star & Garter.

Studies have shown engaging in reading in older age can reduce symptoms of memory decline and boost wellbeing.

Brian agreed. He said: “I missed books desperately, but joining the library has given me a new lease of life.”

Brian was left incapacitated and unable to speak following his stroke. He says he began to make a recovery after moving to Royal Star & Garter, four months later. He said: “In those first four months I didn’t know anything really. I’m getting better. The in-house physiotherapy is helping my recovery tremendously.”

Libraries Week is an annual showcase and celebration of the best that libraries have to offer, and runs from 3-9 October.