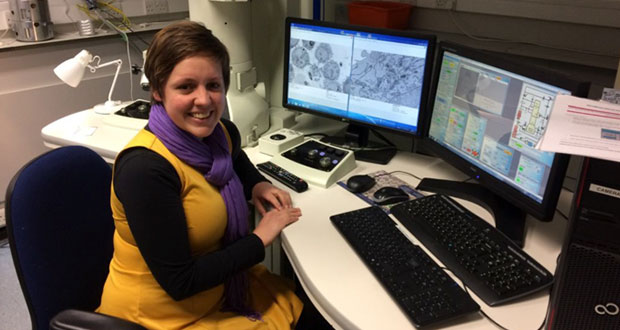 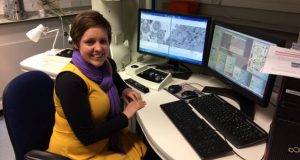 As Aberdeen prepares to host the UK’s largest annual dementia research conference, Kirsty Blackman MP has had a sneak look at the pioneering science taking place in the city to find a treatment for the devastating condition.

In the UK, there are currently 850,000 people living with dementia and more than 3,000 in Aberdeenshire alone. On Friday 3 March, the MP for Aberdeen North, discovered how Alzheimer’s Research UK is supporting researchers at the University of Aberdeen to change this.

During the visit, organised by the UK’s leading dementia research charity, Mrs Blackman got to see the science taking place at the university’s cutting-edge facilities, including laboratories for tissue analyses and microscopy. She also spoke to scientists funded by Alzheimer’s Research UK about the work they are doing, which includes a study into early markers of Alzheimer’s disease. Robert Hamilton, a supporter of Alzheimer’s Research UK and a member of the charity’s Aberdeen Fundraising Group, also joined the MP on the tour.

Prof Bettina Platt, who is the Chair of Translational Neuroscience at the University of Aberdeen and a member of the Alzheimer’s Research UK Grant Review Board, led the tour. Prof Platt recently worked on a study which uncovered the timeline of key changes in the brains of people with Alzheimer’s disease. By revealing early changes that occur as the disease develops, these findings will help to inform and improve drug discovery initiatives that target these key cellular processes.

The tour comes just days before the charity prepares to host its annual Alzheimer’s Research UK Conference in Aberdeen. The Conference will take place over two days from Tuesday 14 March, and will attract more than 400 scientists to the city. Alongside this, Alzheimer’s Research UK is hosting a range of public events to help increase understanding of dementia, including Science Sunday, a fun and engaging way for people of all ages to find out more about the human brain. The free event takes place at the Aberdeen Science Centre, from 10am on Sunday 12 March.

“We should all be immensely proud that the University of Aberdeen is playing such a crucial role at the forefront of research into dementia, and the diseases that cause it, and working towards finding a cure. It has been an absolute privilege to see first-hand how this is taking place, and to know in my own city people are committed to ending the heartbreak and devastation that so many families experience because of dementia. I hope people will take advantage of the events surrounding Alzheimer’s Research UK’s Research Conference, so they can see for themselves the importance of this work. With so many people across the UK living with this condition, it is reassuring to know how widespread efforts are to defeat it.”

“Dementia is our greatest medical challenge and if we are to deliver an effective treatment to change the lives of those affected by dementia, we need all the support we can get. Researchers at the University of Aberdeen are carrying out pioneering research into dementia and we are pleased that Mrs Blackman has had the opportunity to see how they are helping in our fightback against dementia.”

To find out more about the Alzheimer’s Research UK Conference, please visit www.alzheimersresearchuk.org/for-researchers/research-conference-2017