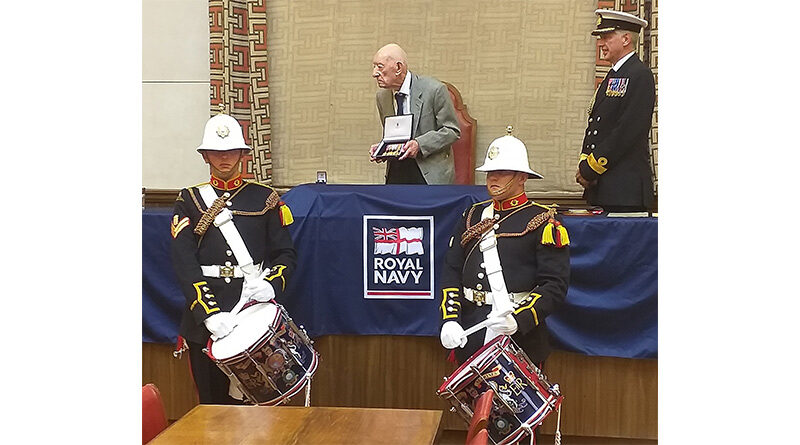 When John “Boy” turned 100 in June, staff at Brook House made his day very memorable which lead on to a momentous ceremony a few months later. On John’s birthday the Mayor of Cambridge Cllr McPherson had a video call together. During the conversation the Mayor found out that John “Boy” had no family relations and had served in the Royal Navy but his medals had been lost.

A few months later the Mayor’s Secretary Penny got in touch with Brook House and said they had been in touch with the Royal Navy and they would like to put on a special ceremony at the Guildhall in Cambridge on VJ Day, 15th August to present John “Boy” with his medals.

On arrival they were escorted upstairs and John was helped to his large red throne chair where he sat with pride throughout the ceremony. Commodore David Elford Naval Regional Commander for East of England, Deputy Lieutenant of Cambridge, Col Roger Herriot and the Mayor Cll Mcpherson all stood to the side of John “Boy”

The Buglers sounded and then the presentations of John “Boy” medals took place.

Veteran badge from ministry of defence

Commodore David Elford said Social Distancing was the only thing stopping him from clasping the medals onto his chest.

Along with the medals was a personnel written letter from First Sealord Admiral Tony Rankin.

Many of the guests came up to have a chat with the star of the show. John “Boy” told Petty Officer Ian Hammond that the National Health Service is excellent and we as British are very proud of it, as it is the only one and everybody else are envious of this wonderful service that we have.

When it was time to leave John “Boy” was asked if he would like to keep his medals on or put them back in the box for now. John replied we better put them in the box or everyone will be calling me Mr. Clunky.

John “Boy” said today has been remarkable and I never expected it to be so grand and just all about me. It has meant a lot to me and I thank everyone that has made this day happen.